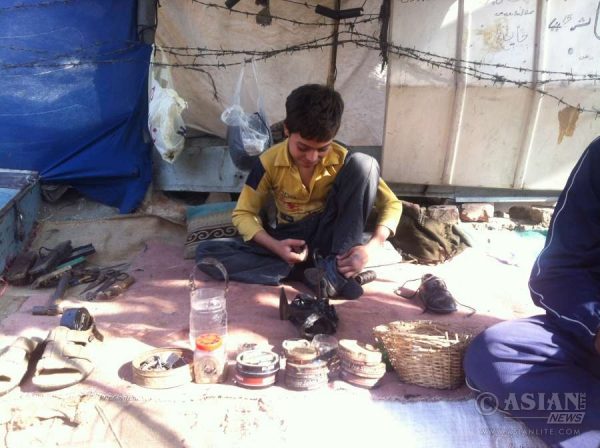 As many as 18.3 million Indians live in conditions listed as “modern slavery” in 2016, equivalent to the population of Netherlands, a rise of 4.1 million since 2014, according to a new global report. In other words, 5,616 Indians were enslaved every day over these two years. On an average, 51 out of every 100 people are vulnerable to modern slavery – bonded labour, forced begging, forced marriage, domestic services and commercial sex work – in India, according to the Global Slavery Index 2016 compiled by the Walk Free Foundation, an advocacy based in Australia.

India has the fourth-highest proportion of people living under enslaved conditions, after North Korea, Uzbekistan and Cambodia. India was at fifth position in modern slavery in 2014, changing place with Qatar, the report said.

“The term modern slavery refers to situations where one person has taken away another person’s freedom – to control their body, their freedom to choose, to refuse certain work or to stop working – so that they can be exploited. Freedom is taken away by threats, violence, coercion, abuse of power and deception,” the Global Slavery Index 2016 report said.

The Asia-Pacific region has the highest number of people living under conditions of modern slavery; almost 46 per cent of human trafficking is reported from the region. While 83 per cent victims are male, around 17 percent are female.

Forced- and child-marriage are high in India, Bangladesh, Pakistan, Nepal and Indonesia. A sex-ratio imbalance, resulting in absence of brides in India, has fuelled the trafficking of women and forced marriage.

Sexual slavery has risen in concert with economic prosperity in India, IndiaSpend reported in April 2016.

The informal nature of the Indian economy has an effect on vulnerability, and accounts, in large part, for modern slavery, which is related to economic, gender and caste inequalities, as a May 2016 Economic Times report said.

In states hit by Maoist violence, such as Bihar, Chhattisgarh, Jharkhand and Odisha, boys and girls between the ages of six and 12 were recruited in children’s units, the ET report said.

These are the ways in which Indians find themselves in modern-day slavery:

Bonded labour: This practice persists in India, mainly because of debt, and the entire family is exposed to the risks of physical violence. People are forced to work under unhealthy conditions, and physical violence is meted out, if they refuse to work. More than 300,000 people were identified as bonded labour, with the largest – official -number in Uttar Pradesh (896,301), followed by Maharashtra (496,916), according to an answer given in the Lok Sabha in December 2015.

Domestic services: As many as 4.2 million people, including men, women and children, work as gardeners, cleaners, drivers, cooks and caregivers across the entire country. This kind of human slavery is prone to overtime working hours, withholding wages, insufficient remuneration and sometimes even physical and sexual violence, according to 2004 data published by US-based Women in Informal Employment: Globalizing and Organizing (WIEGO).

Forced begging: Many Indian beggars are under criminal pressure. A primary survey conducted by the Walk Free Foundation suggests that beggars are deprived of basic needs of survival and continuously threatened by their employers. The leading source of income for children living on streets is rag-picking, practiced by 16 per cent of homeless children, according to a five-city study by Save the Children, an advocacy. Begging is a leading occupation for eight per cent boys and 14 percent girls, but most girls are also involved in taking care of their siblings and other household work, IndiaSpend reported in April 2016.

Commercial sexual exploitation: Women are beaten or forced to work under threat of violence and their families are threatened with legal action if they do not capitulate once enslaved by prostitution. The estimated number of sex workers in India is three million, of whom 1.2 million are below 18 years of age, according to a 2013 report by the Ministry of Women and Child Development.

Forced marriage: About half of women are forced to marry in India before the legal age of 18 and then made to work as unpaid labourers. More than 9,000 married women were bought from the states of Assam and West Bengal to Haryana, according to a May 2013 study by the United Nations Office on Drugs and Crime (UNODC). The study – involving more than 10,000 households – said people who buy brides usually deny having done so, IndiaSpend reported in December 2014.

Human trafficking cases up 92 per cent in six years

About 5,500 cases were registered across India under existing human slavery laws in 2014, according to National Crime Records Bureau (NCRB) data. Human trafficking rose 92 per cent over six years to 2014, IndiaSpend reported in August 2015.

What the government is trying to do

The government has drafted a National Policy for Domestic Workers that is currently awaiting Cabinet approval.

If enacted, the policy would ensure a minimum salary of Rs 9,000 ($135) to skilled domestic help, paid- and maternity-leaves, social security and the right to bargain collectively. It will also include provisions against sexual harassment and bonded labour for domestic workers.

More than 20,000 police personnel have been trained in victim identification, implementation of the new legal framework and victim-centred investigations.