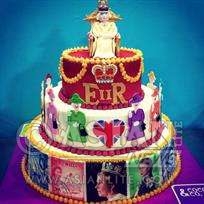 Fruitless Christmas cakes anyone? Try the spicy Armenian variety, a savoury reminder of the community that has made the city home since the 17th century. Third generation Armenian Brunnel Arathoon has put her oven mitts on to churn out these tasty Christmas delights for her maiden, home-based, bake-to-order initiative, with the hope that people will get to know about the Armenians history and legacy in Kolkata.

“My motivation was to let everybody know that we as a community are still there and lot of people don’t know about Armenians and our Christmas celebrations,” Arathoon told IANS.

Proud to showcase her roots in the Eurasian nation through food, Arathoon said the uniqueness of the traditional Armenian Christmas cakes lies in the absence of candied fruits.

“They are fruitless. They are made with almonds, walnuts nutmeg and cinnamon. The cake comes out to be spicy and sweet and not extremely sweet that you normally get. So when you open the box you can smell it,” she explained.

In a week since she began making them, Arathoon has sold 75 pieces and the demand is growing and along with the buzz comes a newfound recognition and respect for the community.

Kolkata has been home to the Armenian Christians since the 17th century and as many as 30 Armenian families continue to be an integral, yet quiet, part of the bustling metropolis. They celebrate Christmas on January 6.

“We are close to 5000 (that have Armenian bloodline) but not baptized in the Armenian Church. So a lot of us tend to go as Anglo-Indians,” she said.

A pivotal aspect of their culture is the nearly-300-year-old Holy Church of Nazareth, located in Burrabazar in the central part of the city.

All in all, there are five magnificent churches across the state and several splendid edifices erected by them, including Stephen’s Court in Park Street.