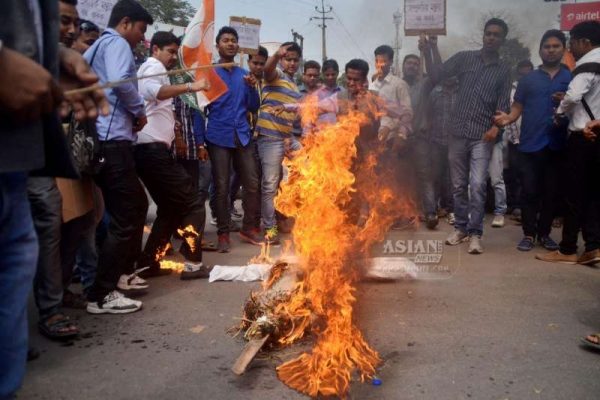 As Indian society grapples with the issue of intolerance and violence, genetic experts are opening up the hoary discussion on whether genetic makeup can predispose people towards anti-social behaviour.

We are back to the debate on nature versus nurture.

The answer may not be easy to find, but some experts say that the monoamine oxidase A or MAOA gene — involved in the regulation of emotions and behaviour — can predispose certain humans towards anti-social behaviour, if they have had adverse childhood experiences.

Many studies in the past have linked genes with offensive bevaviour, but the results have often been inconsistent. A recent study by researchers in Montreal, Canada, though, found that genetics may indeed play a key role in violent behaviour.

The team from Universite de Montreal found that certain polymorphism (change of form) of MAOA gene may disrupt the regulation of emotions and behavioural inhibition in the brain.

“The study found that men with a less frequent variant of the MAOA gene (approximately 30 percent of them) were at a higher risk of exhibiting anti-social behaviour in adolescence and in early adulthood compared to those without this variant, but who also have been exposed to violence as children,” informs Dr Manish Jain, senior consultant (psychiatrist) from BLK Super Speciality Hospital in the capital.

“It implies that even when exposed to the same environment some may develop anti-social traits based on their genetics while others may not,” Dr Jain told IANS.

According to Dr Sameer Malhotra, director (mental health and behavioural sciences) at Max Super Specialty Hospital, personality profile of an individual is influenced by both genes and environment he lives in.

So are we any nearer to a clear-cut answer?

“Through genes one inherits vulnerability factor. Environmental factors in conjunction with the vulnerability can influence behaviour. Anti-social behaviour is linked to conduct disorder in childhood. At times, association with family history of alcoholism or drug abuse and aggression are also observed,” Dr Malhotra said.

“High levels of neurotransmitter dopamine that is involved in the regulation of emotions and problems in the frontal brain cortex are also reported in such people,” he adds.

Other experts feel that people who are victims themselves or have witnessed violence in childhood are more likely to have anti-social tendencies as teenagers and adults.

“The impact on personality would depend on overall environment and positive experiences and the resolution of past experiences, but statically, this statement would be correct that there would be more chances of aggressive tendencies in the absence of support and intervention,” explains Dr Samir Parikh, director, department of mental health and behavioral sciences, Fortis Healthcare.

“There are many social psychological factors which have a significant impact and to say what percentage would be genes would still need more research though,” he adds.

Recently, a criminologist Dr JC Barnes from University of Texas at Dallas found that genes can be a strong predictor of whether someone strays into a life of crime.

The research focussed on whether genes are likely to cause a person to become a life-course persistent offender, which is characterised by anti-social behaviour during childhood that may later progress to violent or serious criminal acts.

“The overarching conclusions were that genetic influences in life-course persistent offending were larger than environmental influences,” says Dr Barnes.

There is no specific gene for criminal behaviour as crime is a learned behaviour. “But there are likely to be hundreds, if not thousands, of genes that will incrementally increase your likelihood of being involved in a crime even if it only ratchets that probability by one percent,” he points out. “It still is a genetic effect. And it’s still important.”

Although research has not concluded genetic basis for delinquent tendencies, the influence of genetics and environment combined cannot be ignored.

“The child’s initial behaviours and learning are moulded through parenting and family interaction. The temperament with which the child is born along with parenting behaviour styles influence one another,” explains Dr Shobhana Mittal, consultant psychiatrist at Cosmos Institute of Mental Health abd Behavioural Sciences in New Delhi.

Children from broken homes, single parents or from families where there is substance abuse, physical, verbal, emotional or sexual abuse tend to have poor family bonding. Disrupted family atmospheres affect the overall emotional health of the child as well as contribute to the child’s personality and coping abilities.

“With immature coping skills, children at times do not understand how to manage anger, frustration resulting in anger outbursts or aggressive behaviour. This further makes the child vulnerable to external influence from their peers,” elaborates Dr Sunil Mittal, director at Cosmos Institute of Mental Health and Behavioural Sciences (CIMBS), in New Delhi.

“A recent genetic analysis of almost 900 offenders in Finland revealed two genes associated with violent repeat offenders were the MAOA gene and a variant of cadherin 13 (CDH13) gene. Those with these genes were 13 times more likely to have a history of repeated violent behaviour,” Dr Jain told IANS.

Although the role of genes cannot be overlooked any more, the jury may still be out on a definite answer.

But as the experts point out, if a lethal gene is lurking there somewhere, it may make a person a little more prone to act out the bad experiences in life.