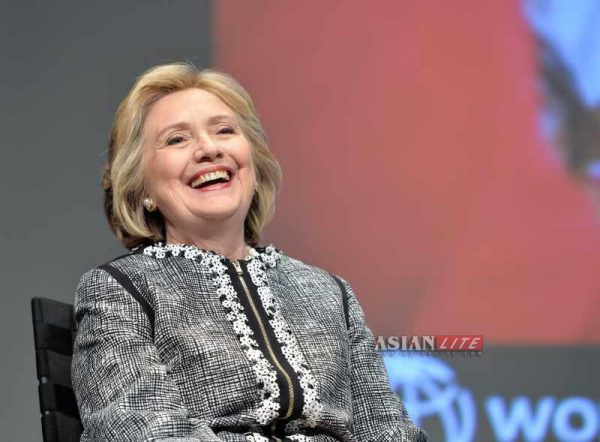 Democratic presidential hopeful Hillary Clinton made a campaign appearance in New Jersey to tout her plan to provide social wellbeing to Americans and defeat her rival Bernie Sanders there in the last big primary on the East Coast.

With 142 delegates up for grabs, New Jersey will holds its Democratic and Republican primaries on the same day as California — June 7 — and with a time difference of three hours the result in the eastern state may well influence voters in the West Coast state with its whopping 546 delegates.

In addition, New Jersey is key because after decades of being a firmly Democratic state, forecasts are that it could swing to Republican Donald Trump in the November election, although Clinton on Wednesday accused the real estate magnate of “fraud” and emphasised what she called his complete “incompetence” to be the nation’s next “commander in chief”, EFE news agency reported.

Clinton took advantage of the rally at Rutgers University in Newark to list her plans if she’s elected president regarding health care, education, equality and social benefits, all of which have been key campaign themes of Sanders, whom she did not mention even implicitly.

The former secretary of state and first lady said that she will honour the “historic legacy” left by current US President Barack Obama with programmes such as Obamacare, at the same time that she will make priorities of providing aid for childcare, family counseling, mental health services and services for addicts.

Clinton said to applause and cheers that when she talks about social rights some people say she’s “playing the woman card”, and she said she was guilty of that if defending pay equality between men and women and opportunities for all is playing that card.

While Clinton never mentioned Sanders in her speech, she lambasted Trump time and again on the same day that a new election poll by Quinnipiac University came out showing the former first lady leading the billionaire by 4 percentage points.

The Democratic frontrunner said that Trump was a “con man” because of the scandal that erupted in recent days over his donations to veterans’ groups, as well as a “fraud” because of the Trump University case involving numerous complaints from “students” who purchased the real estate courses accusing him of bilking them out of thousands of dollars.

She said that his statements on foreign policy were “dangerous” and questioned his ability to be commander-in-chief, adding that he had attacked key US allies, wants to ban all Muslims from entering the US and is promoting nuclear energy abroad in contradiction of long-standing US policy.