Republican and Democratic presidential frontrunners Donald Trump and Hillary Clinton hold leads in nationwide polls amid an escalating feud between the brash billionaire and rival Ted Cruz over their wives….writes Arun Kumar from Washington 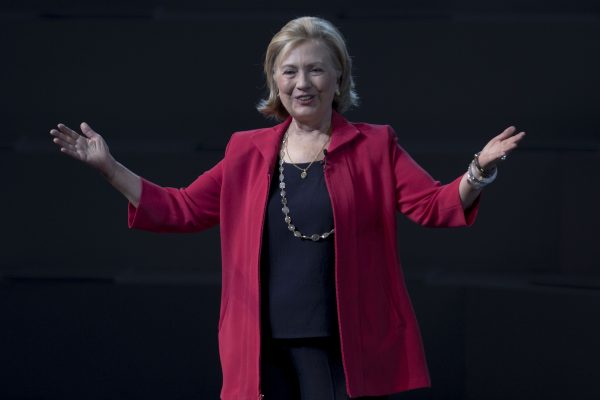 With the nominating primary and caucus season now past its halfway point, a CNN survey average of six recent polls found Trump holding a 12-point lead over Texas Senator Cruz, 43 percent to 31 percent.

The third Republican in the contest, Ohio Governor John Kasich, was well behind at 19 percent.

On the Democratic side Clinton topped her party rival, Vermont Senator Bernie Sanders, 52 percent to 43 percent.

The average suggests Clinton has expanded her lead since mid-February, when an average of national polls conducted after the New Hampshire primary found Clinton just 6 percentage points ahead of Sanders.

Trump’s lead over Cruz is about the same as his lead in mid-February, but both candidates have grown their share of the vote as the field has shrunk. That poll of polls found Trump at 34 percent and Cruz at 21 percent in a field of six candidates.

Meanwhile, a feud between Trump and Cruz over their wives escalated with an angry and emotional Cruz Thursday calling the real estate mogul “a snivelling coward” for attacks on wife Heidi.

But he repeatedly declined to say whether he would support Trump if he’s the Republican presidential nominee. “I’m going to beat Donald for the nomination,” he insisted before saying three times: “Donald Trump will not be the nominee.”

In response to a Facebook ad that shows Trump’s wife Melania posing nude Trump warned Cruz Tuesday night that he should “be careful” or he would “spill the beans on your wife.”

On Wednesday night he retweeted a supporter who photoshopped together a villainous-looking Heidi and a smoky-eyed Melania.

“No need to ‘spill the beans'” because “the images are worth a thousand words,” the photo illustration said.

The ad was produced by an anti-Trump super PAC, Make America Awesome, which has no known connection to the Cruz campaign, but Trump still blamed Cruz.

“I didn’t start the fight with Lyin’Ted Cruz over the GQ cover pic of Melania, he did. He knew the PAC was putting it out – hence, Lyin’ Ted!” he tweeted.

“Donald does seem to have an issue with women. Donald doesn’t like strong women,” he said, at one point calling Trump a “loud, New York bully.”

Kelly, who rarely opines on Trump controversies, responded Thursday to the latest Trump tweet with just one word: “Seriously?”