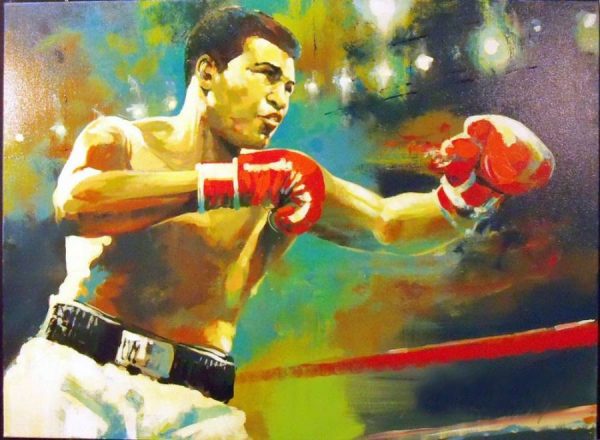 Cassius Marcellus Clay rendered place to Mohammed Ali and then floated away like a butterfly this morning.  But not before the bee had stung the world of boxing and made it a gladiatorial spectacle.  He did it all, three times world champion and the fighter who never gave up. Ironically it was the body that paid the price as Ali’s ailments battered him like he had battered the best on to the canvas.
Tributes will flow in sans frontiers, warm and sincere for he gave sport not just boxing a stature and grandeur that only a few can achieve. Ali was chosen to dine with kings and presidents but he never lost the common touch,his generosity of spirit best reflected in his charities and the time he gave to good causes.
Even after Ali had faded away from centerstage he still made the news. Last time he fell ill the world waited in suspense but there was no KO just the fight back from his corner of the hospital. Ali never threw in the towel not even yesterday when we knew it was t good.   God just rang the bell and stopped the round.
Mohammed Ali was born in Louisville, Kentucky and raised in a Baptist household. Ali renounced Christianity in 1964 and announced that he was a member of the Nation of Islam. He had been incredibly disenchanted with the segregation of the United States and after learning of the militant Islamic freedom fighter, Malcom X, Ali decided to join and changed his name from Cassius Marcellus Clay, Jr. to Mohammed Ali.

In his youth, Ali’s faith and anger at American racism made him a controversial figure, speaking out against white Americans and saying things like:

Integration is wrong. We don’t want to live with the white man; that’s all.
No intelligent black man or black woman in his or her right black mind wants white boys and white girls coming to their homes to marry their black sons and daughters.

Later in life, Ali mellowed, converted to a small sect of Islam called Sufi and even acknowledges other religions as containing some truth, saying: Rivers, ponds, lakes and streams – they all have different names, but they all contain water. Just as religions do – they all contain truths.

As a devout Muslim, Ali was deeply saddened by the 9/11 World Trade Center attacks in New York City and the subsequent anti-Muslim sentiment that swept the U.S. He made a statement saying:

Islam is a religion of peace. Islam does not promote terrorism or the killing of people…If the culprits are Muslim, they have twisted the teachings of Islam.

Ali has championed many issues relating to civil rights and racial equality. He also stood up against the U.S. war in Vietnam and refused to be drafted. The incident was highly controversial at the time and Ali even took his case as high as the U.S. Supreme Court where he was acquitted of all charges. He said:

I ain’t got no quarrel with them Viet Cong… No Viet Cong ever called me nigger.