“It is wonderful to be here,” said US President Barack Obama after he arrived in Cuba for a historic visit. He will hold talks with his Cuban counterpart Raul Castro….reports Asian Lite News 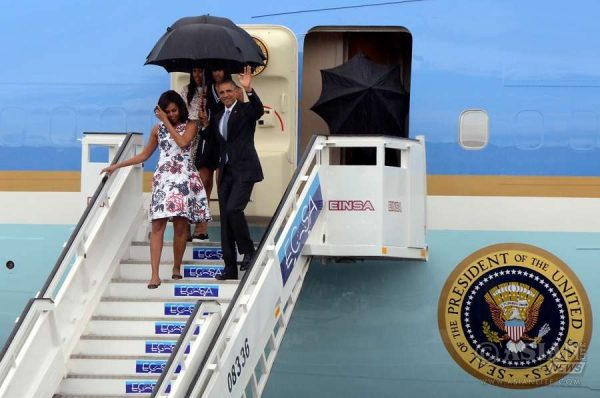 Obama is the first sitting US president to visit Cuba since the 1959 revolution, which heralded decades of hostility.

Obama upon his arrival on Sunday, stepped out from Air Force One — carrying an umbrella as a persistent rain fell on the tarmac. He sent a message to Cubans on a platform that until recently would have been unheard of, CNN reported.

“Just touched down here, looking forward to meeting and hearing directly from the Cuban people.”

Two hours after landing, Obama greeted staff from the US embassy with the words: “It is wonderful to be here”.

“Back in 1928, President (Calvin) Coolidge came on a battleship. It took him three days to get here, it only took me three hours. For the first time ever, Air Force One has landed in Cuba and this is our very first stop.”

On Sunday, his interactions with Cubans were carefully calibrated. He toured the Cathedral of the Virgin Mary of the Immaculate Conception, greeting Cardinal Jaime Ortega, a key proponent of improving ties between the US and Cuba.

Crowds had gathered in the faded colonial streets of Old Havana to glimpse Obama and his family (First Lady Michelle and daughters Sasha, Malia) as they passed through on foot.

Later in the evening, Obama dined at a “paladar” — one of hundreds of privately-run restaurants that only recently became permissible in the state-run economy.

Obama is scheduled to meet President Raul Castro on Monday, but not retired revolutionary leader Fidel Castro, and the pair will discuss trade and political reform.

Before he departs on Tuesday, Obama will watch the Cuban national baseball team play the Tampa Bay Rays, in town for an exhibition game as US Major League Baseball works to update immigration rules for Cuban players.

The first mail flight between the two countries since 1968 arrived in Havana from Miami on March 16, carrying on it a letter from Obama to a Havana coffee shop owner, a response to a series of missives he had received ahead of his trip.