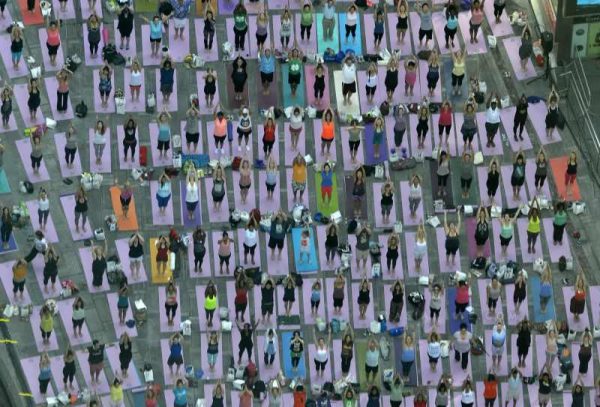 As the NASDAQ was zooming up 69 points on microsecond transactions at 11 a.m. on Monday, outside in front of the stock exchange building on Times Square, peace and calm wafted among the thousands of yoga enthusiasts celebrating the International Yoga Day a day early to coincide with the Summer Solstice.

Rashmi Galliano of the Integral Yoga Institute, who led the 11 a.m. yoga session, told IANS the day’s significance was showing how yoga was bringing “peace and easea into the lives of the New Yorkers in a city known for its fast-paced environment.

The theme of the annual solstice celebrations in Times Square is “Mind over Madness Yoga.”

India’s Consul General Riva Ganguly Das, who spoke there before the session started, talked of the universality of yoga and its recognition by the United Nations which declared the International Yoga Day two years ago.

Tim Tompkins, the president of the Times Square Alliance, began the celebrations at 5 am by leading a session of yoga for the early birds. Eight sessions were scheduled through the day ending at 8:30 pm.

The sessions are to be led by yoga teachers who draw on traditions as diverse as Iyengar, Bikram and Tibetan Buddhist. Over 30 yoga studios are participating in the celebrations.

As of noon, about 6,000 people had participated in the yoga sessions held in a three-block area. The numbers were expected to swell by evening as after-work crowds joined in.

Douglass Stewart, the co-founder of the annaul Solstice in the Times Square event, told IANS, “The seed of yoga that was planted in India millennia ago and nurtured by rishis is now flowering around the world 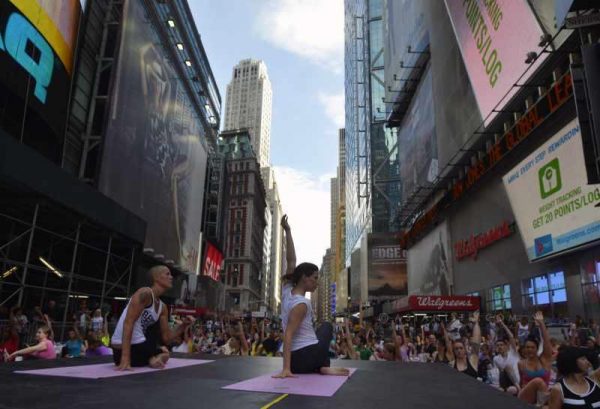 , crossing to all nations.”

The yoga celebrations at Times Square, “one of the most intense and frenetic places on the earth,” he said is to bring “some stillness and a little bit of santosa a” contentment – to our lives..”

The event was cosponsored by the Indian consulate, which is organising events Thursday at the John F. Kennedy Airport in New York and Newark Liberty Airport as well as the consulate.

On Saturday as large yoga celebration was held at in front of the city landmark Unisphere, a 37-metre stainless steel globe, at the Queens Meadow Park.