War build-up in Syria: To influence US elections or is it real?….A special column by Saeed Naqvi

Americans and the Russians are leaping over the threshold in Aleppo — almost. Note the rhetoric: US State Department Spokesman, John Kirby, says: “Extremist groups will continue to exploit the vacuums in Syria to expand their operations, which could include attacks against Russian interests, perhaps even Russian cities. Russia will continue to send troops home in body bags, and will continue to lose resources, perhaps even aircraft.” If the war continues, “more Russian lives will be lost, more Russian aircraft will be shot down”.

This invites a double-fisted punch from Major General Igor Konashenkov, Chief of Information, Ministry of Defence: “As for Kirby’s threats about possible Russian aircraft losses and the sending of Russian servicemen back to Russia in body bags, I would say that we know exactly where and how many ‘unofficial specialists’ operate in Syria and in the Aleppo province and we know that they are involved in the operational planning and that they supervise the operations of the militants. But if somebody tries to implement threats (articulated by Kirby) it is by no means certain that these militants (and their minders) will have the time to get the hell out of there.”

In fact, Russian missiles have already been fired on the Western-led coalition.

In the midst of all this, the UN Envoy to Syria, Staffan de Mistura, makes a most extraordinary statement. He says that Russian and Syrian forces should immediately stop their “aerial bombing” of Aleppo. After this step, the militants from the Fatah al-Sham Front group — formerly known as the Nusra Front, which has been linked to Al Qaeda — should leave the city.

If the militants lay down their weapons “in dignity” and leave, Mistura would “personally” accompany them out. Why would De Mistura’s lead that group out of the city which the UN considers a terrorist organisation? 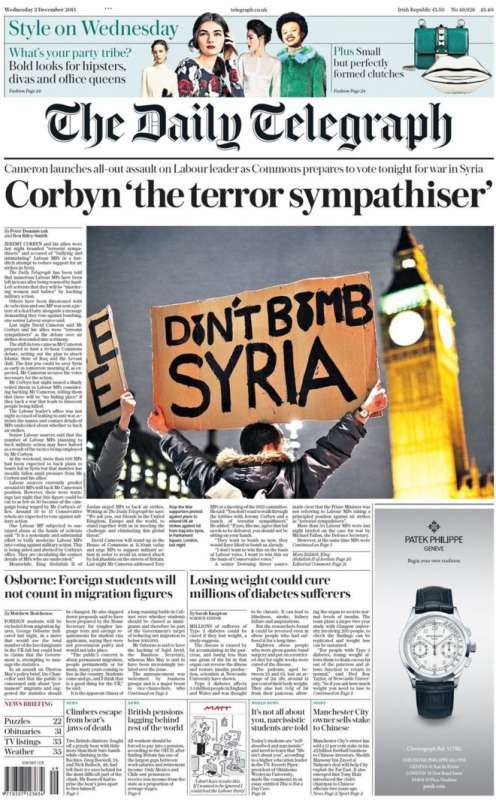 It is all hurtling towards the US elections on November 8.

So much part of the election propaganda has Russia become that images of the Russian bear, in Donald Trump’s corner, menacing the US, must be presumed to have been sketched in the minds of many voters. The one who will fight this monstrous ogre is Hillary Clinton. This build-up of the “Russian enemy”, according to some analysts, may therefore be advantageous to Clinton.

If, by some miracle, Russian noses can be rubbed in the dust, Clinton supporters outside the last debate between the candidates in Las Vegas on October 19 will blow the trumpet and throw up their hats — just the images the media will rejoice in projecting.

By the same token, would a projection of anything resembling American reversal in Aleppo, boomerang on Clinton? Would such an outcome not make Trump look like a sage? “I told you we must talk to the Russians and fight terrorism.” Should the alliance lose Aleppo, there will be a scramble for Mosul. The propaganda machine is waiting to spin a victory anywhere.

Anyone following US-Russian actions in West Asia, particularly Syria, must come away with one unmistakable conclusion: the US, France, Britain, Israel, Saudi Arabia, Qatar and Turkey tried their damnedest to bring about regime change in Syria. They destroyed Syria, but Bashar al Assad is still President despite their six-year-long war against him.

Russians entered the war to fight terror groups and protect Assad. If they prevail in Aleppo, they will look like the victorious power. Indeed, when CNN’s Christiane Amanpour interviewed Russian Foreign Minister, Sergey Lavrov, in Moscow earlier in the week, he accused the US of helping terrorism in Syria. One would have expected Amanpour to be on the offensive in her follow-up question, but she took it lying down.

Anglo-Saxons, Lavrov continued, were unable to come to terms with the emergence of a multipolar world.

A totally composed Lavrov provided an unsettling contrast to Western leaders in the grip of panic. French and Spanish representatives are appealing to the UN Security to impose a no-fly zone over Aleppo. British Foreign Secretary Boris Johnson is advising air strikes over Syria. They are all checkmated by the Russians on the ground in Syria and at the UN.

The Russian resolution seeking a ceasefire to enable humanitarian aid to the besieged in Aleppo comes with a proviso: all aid convoys will be checked by Russian and Syrian forces.

Lo and behold, Egypt bolts from the coalition on which the Saudis have spent blood and treasure. Egypt supports the Russian resolution.

Just as the Russian-Syrian combine increases its grip over Eastern Aleppo (so far in rebel — read al Nusra — hands), 62 countries abandon all thought of dethroning Assad; they rush to the Security Council to prevent further deaths in Aleppo. This would be quite unremarkable were it not for a fact of historic importance. Saudi Arabia and Qatar joined the group seeking a “transition according to the Geneva conventions”. Look, who is citing the scriptures! On the eve of US elections, it is all totally topsy-turvy.

Supposing Clinton wins the election, will she as President be able to affect the outcome in Syria? Or have the Russians imposed a fait accompli by totally altering the situation on the ground? Remember her imperious wave of hand as Secretary of State: “Get out of the way, Assad.”