Zenises has presented the world’s most expensive tyre at the firm’s Reifen Show launch event. The world record, which is the first official third-party adjudicated record of its kind, has set the bar high at US$600,000 for a set of four tyres – a figure verified by the Guinness Book of World Records.

The Z-branded 295/35 ZR21 107Y XL tyre at the centre of the record attempt was produced in the Sentury Tyre factory in Qingdao, Shandong Province, China. And while raw material costs have been increasing in China since the start of the year, this doesn’t account for the tyres record-breaking price tag.

Rather, the cost can be attributed to the addition of 24 karat gold and specially selected diamond stones. According to Zenises, these Midas-like touches were added with the assistance of Joaillier Prive and its Italian artisan jewellers before the tyre was returned to the UAE for the application of gold leafing by the same craftsmen who have worked on the new presidential palace in Abu Dhabi. 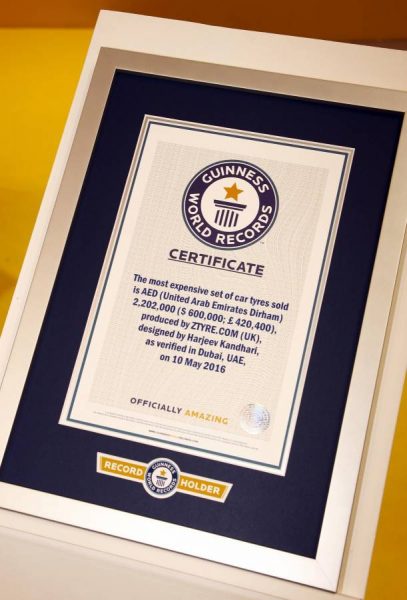 The record was announced by Guinness Book of World Records adjudicator, Sophia Greenacre who told Tyres & Accessories that the record’s criteria sets the minimum at US$500,000. To put this in perspective, this is well above the $92,000 needed for Airbus A380 tyres and what T&A previously though were the world’s priciest tyres (see below). To qualify for the Guinness World Record, tyres must also be commercially available and must physically function on a car.

Commenting on the record, Zenises CEO Harjeev Kandhari said: “We’ve always treasured the outstanding skills and dedication involved in developing our Z Tyre range so we thought what better way to celebrate this achievement than with a record-breaking special set of tyres.”

Prior to the official establishment of this Guinness World Record, Tyres & Accessories reported that Michelin’s Bugatti Veyron tyres were the world’s most expensive with a set of four costing around 25,000 pounds sterling. For its part Guinness put the figure closer to 10,000 for the Veyron rubber, but at this scale what’s 10,000 between friends?

“We have been asked by many supporters that they would like to see the tyre and are thus bringing the tyre back to Dubai where it can be viewed at our offices for the Holy month of Ramadan. It will then travel to Europe where our European customers will be able to view it,” said Mr Khandhari. 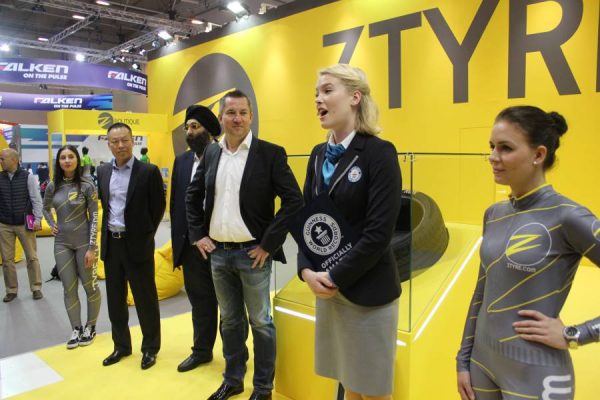