Prime Minister Narendra Modi expanded his council of ministers by elevating Minister of State for Environment Prakash Javadekar in the cabinet and also inducted 19 new Ministers of State. 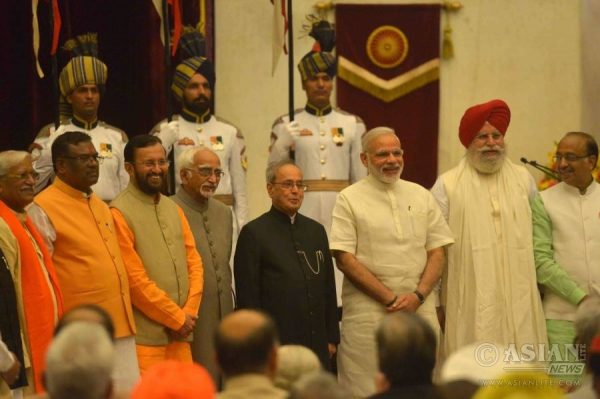 Besides Javadekar, who was Minister of State (Independent), all new Ministers of State were sworn in by President Pranab Mukherjee at the Rashtrapati Bhavan here in the presence of Vice President Hamid Ansari, a galaxy of union ministers, including Arun Jaitley, Rajnath Singh, Nitin Gadkari, Smriti Irani and Chaudhary Birender Singh and BJP chief Amit Shah.

However, External Affairs Minister Sushma Swaraj skipped the occasion due to a prior diplomatic engagement – a meeting with the visiting Hungarian Foreign Minister.

According to sources, five Ministers of State were also dropped ahead of the swearing in.

With the induction of the 19 and the dropping of the five Ministers of State, the strength of Prime Minster’s Council of Ministers, including himself now stands at 78.

During the swearing in, RPI leader Ramdas Athawale made a minor faux pas when he started reading the conventional oath taking paper without pronouncing his name and was corrected by President Pranab Mukherjee.

Modi had taken over as Prime Minister on May 26, 2014 and had first expanded his ministry in November 2014.