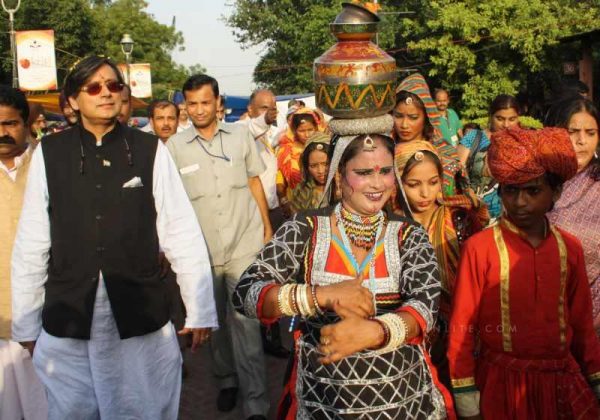 “We can’t have uninterrupted talks with Pakistan as Mani Shankar Aiyar suggests. If the military and ISI unleash Lashkar-e-Taiba in Mumbai and other cities, we should interrupt talks. We can’t talk to people who cannot control their nationals,” said Tharoor here on Thursday.

Tharoor was speaking at a session ‘Pakistan is in the eyes of the Beholder’, in the ongoing Penguin Spring Fever festival in New Delhi.

“Its surrendering our self respect by saying we will talk to you even if your people are coming and killing us,” Tharoor said.

Suggesting a solution to the tangle, Tharoor said that both the countries should increase people to people contact. “We should try to change the stakes in Pakistan by dramatically opening up people-to-people contact. Let us be generous with visas with writers, diplomats, and business men,” he said.

He also suggested that trade between the two countries should open up – even with military owned companies. “Permanent hostility is a mood, not policy,” he said, adding that we should play more cricket with Pakistan.

The former minister also said that whenever India has tried to make peace, that has been reciprocated with an attack. “There is nothing we want from Pakistan but peace,” Tharoor said, adding that they seem to want Kashmir and they will continue to do so.

Tharoor noted that the core issue with Pakistan is not Kashmir but the nature of the Pakistan state. Paraphrasing Voltaire, he said that Pakistan army has a state, not otherwise. “You join the army to run the country,” he added.

He went on to say that the military is involved in everything in Pakistan – from petrol pumps, exports, real estate, Athink tanks and imports to universities- Pakistani army has the highest portion in the country’s GDP in the world. “This is justified by conflicts on borders,” said the Congress MP.

Participating in the discussion, former Pakistan High Commissioner TCA Raghavan said that it is important to engage with Pakistan. “Just talking won’t solve anything in Pakistan, Pakistan has to reduce the role of army on its own,” said Raghavan.

Sharing her traumatic memory from 1971 war, noted Bangladeshi author Taslima Nasrin said that 1971 war has proved that the two nation theory was wrong.

“1971 has proved that Muslim immunity is a myth and that the two nation theory is wrong. If you base a country on religion, it will become fundamentalist,” said Nasrin.