Chabahar Port is hardly 100 kilometre away from Pakistan’s Gwadar port, which the Chinese are trying to connect with their own territory in Xingjiang province. India got an MoU with Iran to develop two berths in the port to facilitate trade to Central Asia, especially Afghanistan. Iran is a Shia citadel, a source of strength for Shias all over the world. About 25 per cent of Pak population are Shias. Some powerful elements in the Pak establishment tried to fail Iran President Dr. Rouhani’s visit to Pakistan by staging the ‘Indian Spy’ drama and creating a widespread impression through the media that Iran was in league with India in its alleged role of fanning insurgency in Baluchistan…. writes Syed Shihabudhin

In January, Pakistan’s Prime Minister Nawaz Sharif and his Army Chief Gen Raheel Sharif together flew to Saudi Arabia and then to Iran with an olive branch in a declared effort to bring peace between the two rival sectarian giants. In Riyadh, this mission was not taken seriously. Here the Saudis did not forget that Pakistan rejected their country’s request to send troops to Yemen to fight the Houthi rebels. In Tehran, the two Sharifs’ mission was appreciated. Iranian President Dr. Hassan Rouhani’s two-day visit to Pakistan within less than three months after the visit of the Pak leadership showed Iran’s eagerness to improve bilateral economic relations and take Iran-Pak trade to US $5 billion per year.

“We can meet Pakistan’s needs of oil, gas and electricity. Pakistan can count on Iran and Iran is ready to live up to Pakistan’s expectations,” the Iranian President was quoted as saying.

Dr. Hassan Rouhani made this promise showing his awareness of what ailed the Pakistani economy the most. But it would not be an exaggeration to say he did not return home with the same excitement, with which he came to Pakistan on March, 25.

The Dawn editorialised that this visit was ‘Partially eclipsed’ by the row surrounding the ‘arrest’ of a so-called Indian agent in Baluchistan. It is not known where and when this Indian agent was ‘arrested’ but, suitably, the Pak Army chose to disclose this news on the arrival of the Iranian head of state emphasising that the so-called agent had crossed over to Pakistan from the Iranian port of Chabahar. Perhaps certain forces in Pakistan were out to sabotage a positive turn in Iran-Pakistan relations because (a) of sectarian reasons; (b) because of the fear of Saudi Arabia’s displeasure and (c) because of India’s involvement in the development of Iran’s Chabahar Port – hardly 100 kilometre from Pakistan’s Gwadar port, which the Chinese are trying to connect with their own territory in Xingjiang province.

Iran is a Shia citadel, a source of strength for Shias all over the world, especially Asia. Sunnis all over the world looks upon Saudi Arabia as their religious and ideological fountainhead. It is guessed about 25 percent population in Pakistan is Shia. Until July, 1977, Shias lived as equals of Sunni population in Pakistan. Things began to change, when Gen Zia-ul-Haq snatched political power and became a Military dictator. His dislike of Iran and Shias was strengthened and sustained by his closeness to Saudi Arabia and the US, who in the 1980s were encouraging Sunni extremism and obscurantism to fight the Soviet troops in Afghanistan.

This had an all-pervasive effect on the Pakistan society. Even in the Armed forces Islam began to be defined by extremist Sunni sects like Wahabis and Salafis who accepted no place for Shias in Islam. During Gen Zia’s rule a movement was launched to declare Shias a non-Muslim minority. This did not happen, but today Shias are unofficially treated as a non-Muslim minority in Pakistan and subjected to persecution.

This treatment of Shias in Pakistan today reflects the regard the Sunni extremists in society and Armed forces are willing to give to Iran. Thus it appears some powerful elements tried to fail Dr. Rouhani’s visit by staging the ‘Indian Spy’ drama and creating a widespread impression through the media that Iran was in league with India in its alleged role of fanning insurgency in Baluchistan. 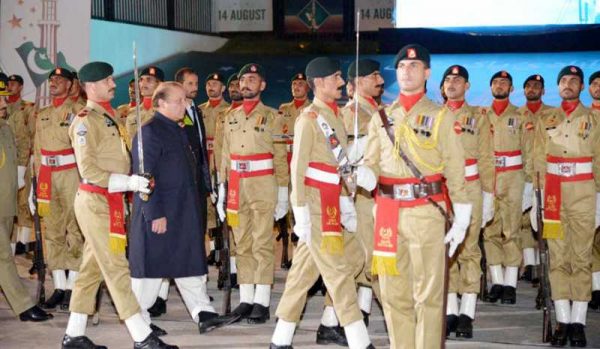 Iran is itself the victim of Pakistan-based Salafi and Wahabi groups who keep on intruding into Iran’s Sistan-Baluchistan for terrorist activities. Pakistan’s Sunni extremist groups who enjoy, covert Pak and Saudi support, always allege that Sunni majority in Sistan-Baluchistan suffers brazen discriminations in a Shia-majority Iran. But here the world’s human rights organisations have not heard of regular forced disappearances and brutal killings of innocent Baluch people by Pak Army’s intelligence agencies as happens in Pakistan’s part of Baluchistan. This also is a Sunni-majority province of Pakistan, but the Sunni extremists who are always eager to create problems in Sistan-Baluchistan, have no tears to shed for the persecution and open systematic elimination of Baluch Sunni thinkers, politicians, doctors, students and young boys and girls – just a repeat of what the Army did in 1971 in erstwhile East Pakistan against Sunni Bengalis.

That Sistan-Baluchistan is a Sunni majority province of Iran is not of much concern to Pakistan. This province is important for Pakistan because the Chabahar port is located here.  Iran is developing it in a big way and India is participating in its development. In February this year the Union Cabinet gave its approval to the proposal of the Ministry of Shipping for provision and operationalisation of a credit of 150 million from EXIM bank for the development of Chabahar.

The Indian Cabinet authorised the Ministry of Shipping to set up a company in Iran for implementing the Chabahar Port Development Project and related activities. On May 6, 2015 Shipping Minister Nitin Gadkari signed an MoU with Iran in Tehran committing India to equipping and operating two berths in Chabahar Port Phase–I with a capital investment of 85.21 million. Afghanistan, Iran and India have signed agreement under which Indian goods going to Afghanistan and Central Asia from the Chabahar Port will receive a preferential treatment. Pakistan has been refusing India and Afghanistan the transit facilities for their over land trade. Now Pakistan will be bypassed. The latest visit of Indian Foreign Minister Sushma Swaraj to Iran also emphasised on expediting other bilateral economic and trade agreements.

And this India-Iran close economic relationship might be the only reason that the Pak Army staged a media coup by showcasing the ‘Indian spy” at the time of Dr Rouhani’s visit and, transparently, telling the guest that the accused as a collaborator from India is fanning insurgency in Baluchistan from Chabahar to thwart the China-funded China-Pakistan Economic Corridor (CPEC). The ‘Indian Spy’ is also shown in an ISPR video as ‘confessing’ that he was in Baluchistan to sabotage the CPEC project. It was, surely, also meant to please the Chinese masters who are initiating and illegally pursuing the CPEC project over an area which does not even belong to Pakistan.