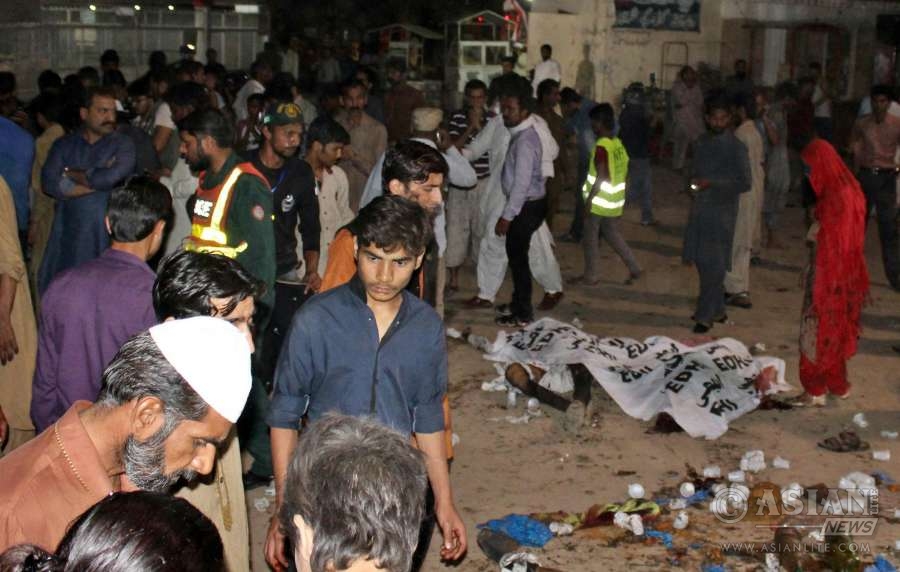 Over 100 others were injured when a suicide bomber detonated himself inside the emergency ward of the Civil Hospital.

The blast took place when a large number of lawyers were gathered to collect the body of a murdered colleague, the president of Balochistan Bar Association Bilal Anwar Kasi, who was killed in a separate attack.

“The Secretary-General urges the Government to do its utmost to ensure safety of the population and bring to justice the perpetrators of today’s attack,” Haq added.

The Pakistani Taliban faction Jamat-ul-Arhar has claimed responsibility for the attack.

The suicide attack is one of the worst terror attacks in Pakistan this year, authorities said. The Quetta media, however, put the death toll at 93.

Samaa TV said bodies were strewn on the floor, some still smoking, “amid pools of blood and shattered glass”.

A bomb disposal squad said the suicide bomber had around 10 kg of explosives hidden in his vest, Xinhua news agency said. Police found the limbs of the bomber.

ARY News said the dead included at least 25 lawyers. As the explosion ripped through the hospital, Aaj TV cameraman Shehzad Khan could be heard on the camera reciting the “Kalma” in a groaning voice as he died.

The other cameraman to get killed was Mehmood Khan of DawnNews.

Quetta’s Urdu media — Daily Millat, Baaghi TV and Urdu Post — however, put the death toll at 93. In any case, doctors warned that the toll could rise because some of the injured were in a serious condition.

It was the worst terrorist attack in Pakistan this year since the March 27 bombing at Gulshan-e-Iqbal park in Lahore that left 75 people dead.

Gen Sharif ordered intelligence agencies to initiate “special combing operations to target those involved in terror attacks”, a spokesperson for the military said.

His comments came even before the police could say who was responsible for the horrific attack.

The lawyers were at the hospital to take the body of Bilal Anwar Kasi, president of the Balochistan Bar Association who was killed earlier in the city, Dawn reported.

Gunfire erupted after the explosion.

A stampede too broke out, causing chaos at the hospital. Smoke filled the corridors of the emergency ward. Lawyers who survived the blast rushed out to fetch stretchers.

Shocked survivors wept and comforted one another. One journalist broke down after seeing the bloodbath. Many of the dead were in black suits and ties — the lawyers’ uniform.

Police and Frontier Corps surrounded the hospital. An emergency was declared in all Quetta hospitals. Many of the wounded were rushed to the Combined Military Hospital. Some were flown to Karachi.

“This was a security lapse and I am having this personally investigated,” Balochistan Home Minister Sarfaraz Bugti said.

Prime Minister Sharif expressed his “deep grief and anguish over the loss of precious human lives”.

Former Chief Minister Abdul Malik called it the “blackest day” in the history of Balochistan.

Lawyers across Pakistan denounced the killings in Quetta. Lawyers in Karachi boycotted the courts. The Bar Association of Pakistan called for a three-day mourning.

Lawyers have been frequently targeted in Balochistan.

Balochistan has experienced violence and targeted killings for more than a decade.

Balochistan is home to a low-level insurgency by Baloch separatists. Al Qaeda-linked and sectarian militants also operate in the region. Islamabad routinely blames New Delhi for the unrest in Balochistan.