Islamic State’s shadow on the land of Tagore and Nazrul ….Saeed Naqvi 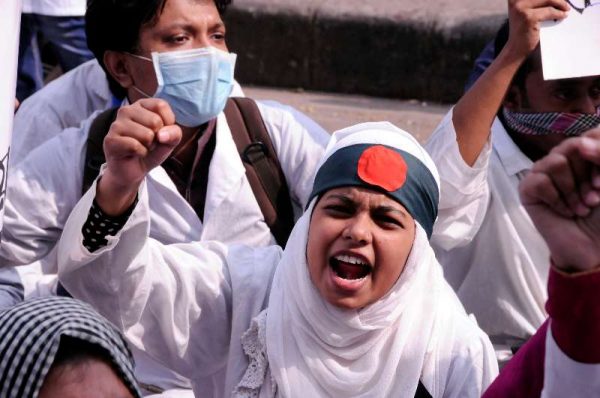 It was like a macabre end to a Chabrol movie. I had returned with images of such aesthetic delight from the Pahela Baishakh festivities in Dhaka that the news of Professor Rezaul Karim Siddique having been hacked to death by Islamists left me in something of a daze.

Promotion of Bangla syncretism, which I had found so compelling, was precisely his “guilt”: He was in the vanguard of progressive literary and cultural activities, on the Rajshahi university campus; keen that students take an interest in the poetry and music of Tagore and Qazi Nazrul Islam, modern dance dramas, just the sort of stuff that lends to the Bangla cultural scene so much vibrancy.

The Islamic State (IS), which claimed responsibility for the killing, said Siddique was inviting Muslims to the path of “atheism”. A few days later, the rampant culture of impunity claimed its next victim – Xulhaz Mannan, editor of the gay, transgender magazine, and his fellow activist Mahbul Rabbi Tonoy.

So far extremism had struck in the Bangla countryside. The latest attacks are in the heart of Dhaka, deepening concerns about Prime Minister Sheikh Hasina Wazed’s grip on the administration.

A criticism of the regime on these lines invites from Sheikh Hasina a knee jerk response: darts are being fired by arch enemy Khaleda Zia, the BNP, Jamaat-e-Islami – the source of all Islamic militancy in Bangladesh. She is not exactly in denial of the IS presence but her focus is on the Khaleda-Jamaat mischief. 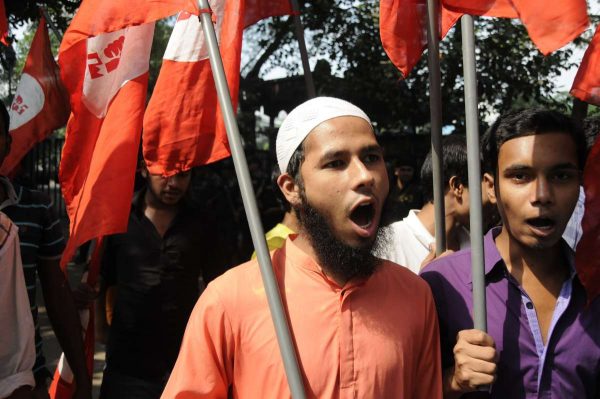 In this kind of polarization, what value does one place on an interview that a perfectly sensible, liberal editor in Dhaka places in my hand. Dabiq, the glossy IS magazine has in a Q and A, invited Shaikh Abu Ibrahim al Hanif, the Emir of the Khalifah’s soldiers in Bengal, to spell out his plans. The 13-page interview, if validated as being authentic, has a dreadful message for Bangladesh: IS headquarters may shift to the country where Shias, Qadianis, Hindus and other deviants espousing cultural syncretism will be terrorized to their knees.

“Jihad base in Bengal will facilitate guerilla attacks in India from both sides.” There is terrible news for Myanmar too: “Cells” will be helped until the nation is overwhelmed.

Of course there is institutional support for the ghastly killings of writers, teachers, artists with a liberal streak who have been hacked to death with machetes and meat cleavers. Los Angeles Times headline rings alarm: “Bangladesh may be the next providing ground for global Jihadist groups.”

Macabre attacks on soft targets in Bangladesh has multiple purposes: they discredit the Hasina government, intimidate liberals, the anti-Jamaat e Islami masses. Under stress, the Hasina establishment responds to such criticism by unfurling its authoritarian fangs. This explains the crackdown on editors and journalists: 84 cases against Mahfuz Anam, editor of the Daily Star, and arrest of 81-year-old Shafiq Rehman.

The regime’s authoritarian streak, disheartens the secular, liberal elite. True Hasina takes on the obscurantist forces but must a price be paid in civil liberties to contrive an unsteady, status quo?

Because Indo-Bangladesh relations have seldom been as good as they are today, there is a suggestion, in murmurs among the elite that New Delhi supports the illiberal regime. This kind of talk carries. At the popular level questions surface: why must Dhaka be so obsequious with an “RSS led government”?

An influential China lobby takes heart and looks for balance in the Dhaka, Beijing, New Delhi, Washington quadrangle. Any illiberal act by the regime in Bangladesh correspondingly causes tongues to wag about New Delhi’s heavy handed handling of affairs like the JNU and Hyderabad universities. Between New Delhi-Dhaka official relations and the people-to-people perceptions, contradictions sharpen.

What can New Delhi do? It certainly is in no position to stand on high moral ground and proffer advice to a regime increasingly intolerant of dissent.

The BNP under Begum Khaleda Zia is a depleted force banking on the Jamaat-e-Islami’s excesses. But her antecedents do link her to powerful elements in the army, a source of great discomfort to the Prime Minister. She is therefore willing to give the armed forces all the toys they want including a nuclear submarine to be used against few know who.

The army is in clover, what with both the ladies outbidding each other to keep it in good humour. The bonanza from UN Peace Keeping duties increases by the day. Recently Saudi Arabia very nearly extracted Dhaka’s participation in their year long war in Yemen. A decision to send troops was reversed by Sheikh Hasina: she agreed to troops only under the UN.

By seeking Dhaka’s help, Riyadh was out to spite Islamabad which said “no” earlier. That Sheikh Hasina even toyed with the idea was to undermine Khaleda Zia’s support in Islamabad. Her expectation also was that Riyadh would help tone down Jamaat-e-Islami opposition to her. Has the Saudi initiative failed or does it still have life in it?

Meanwhile, the diplomatic corps cannot take its eyes off the string of gruesome murders – four this month alone. American Human Rights group must have played a hand in 29 Bangladeshi bloggers being placed on the State Department list. In other words, if free thinking bloggers are threatened with death by IS, Al Qaeda and sundry extremists, they will be entitled to apply for US residence.

This has the potential to swell the ranks of would be victims. It is a perfect arrangement: if militants wielding machetes, meat cleavers and bombs can qualify for the houris of paradise, their potential victims can now aspire for a fall back position in the real land of milk and honey.