Few people will have any objections to chanting “Bharat Mata ki Jai (Glory to Mother India)”, but are unlikely to accept the idea of being compelled to say it.

They may still do so out of fear, but that can hardly be the kind of patriotism which the Rashtriya Swayamsevak Sangh (RSS) chief Mohan Bhagwat had in mind when he said that the new generation had to be taught to hail Mother India.

His directive, however, was promptly taken up by the Maharashtra legislators, including those belonging to the Congress and the Nationalist Congress Party (NCP), who decided to expel a Majlis-e-Ittehadul Muslimeen (MIM) MLA for refusing to chant the slogan.

It is now obvious that the catchphrase has become the latest test after the focus on beef by the BJP and the Sangh Parivar to judge a person’s patriotism.

If the ostensibly “secular” parties like the Congress and the NCP joined the saffron brotherhood in Maharashtra to ascertain a person’s loyalty, the reason is a pusillanimous disinclination to be branded as unpatriotic by the gung-ho saffron brigade. 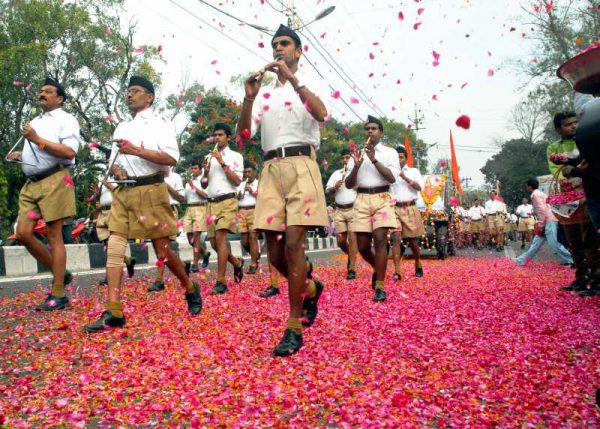 It will not be easy for the Congress to get over its cowardly faus pas in Maharashtra, which has starkly exposed its secular pretensions.

There is little doubt that Rahul Gandhi’s bluster will lose much of its thrust in the coming days.

As past-masters in playing a win-win game with the concept of nationalism, the Hindutva warriors must be delighted with the new card handed to them by their mentor in Nagpur.

They undoubtedly believe that it can be used to corner their political opponents and bring them in line with saffron xenophobia.

It will take considerable political courage and intellectual virtuosity for the Left-Liberals to challenge the BJP’s latest divisive manoeuvre.

The “old” Nehruvian Congress might have been able to point to the fascistic tactics guiding the BJP and the parivar, but not the present self-serving and intellectually vacuous dispensation.

Yet, the arguments against the latest saffron offensive are obvious. There are already symbols which represent the country such as the tricolour and the national anthem. A respectful attitude towards these emblems is enough to testify to person’s loyalty.

There is no need to add a slogan and that, too, by a quasi-political outfit like the RSS whose contribution to the independence movement was nil.

Besides, the danger of vigilantism inherent in making a slogan obligatory for a person to prove his patriotism is obvious.

There may be occasions as in Mumbai some years ago when the Shiv Sena used to accost people in the streets and ask them to speak in Marathi. Those who fumbled were beaten up.

Not surprisingly, the Sena now favours the revocation of the citizenship and voting rights of those who refuse to pay obeisance to Mother India.

For the saffron camp, a major purpose behind the coinage of the slogan is to needle the Muslims, who are unwilling to bow their heads to any entity other than Allah. This is the reason why they do not say Vande Mataram since Mother India in the song is not a human parent but a divine being. Their objection is understandable, since for devout Muslims divinity resides only in Allah.

The Congress appreciated this reservation in its days of prime, but not today when it is clearly ignorant of such religious-cultural sensitivities, as the senior general secretary, Digvijay Singh’s naive query: “What is wrong with saying Bharat Mata ki Jai?” suggests.

The BJP, on the other hand, knows perfectly well why the Muslims are willing to say Jai Hind or Jai Bharat, but not the RSS chief’s preferred slogan.

Its objective is to provoke the followers of the “religion of peace” — to quote a view expressed by Narendra Modi at a Sufi conclave in Delhi — which is unlikely to be widely endorsed by his party.

Ever since the BJP secured a majority in the Lok Sabha, it has been trying relentlessly to push its Hindutva agenda. At first, the hardliners organised the ‘ghar wapsi’ and love jihad campaigns. Then they turned to assaulting and even killing suspected beef-eaters.

The ‘Bharat Mata ki Jai’ gambit is their latest ploy, which includes a threat by a BJP member to cut off MIM leader Asaduddin Owaisi’s tongue for refusing to chant the slogan.

The BJP and the RSS apparently believe that their slogan follows naturally from the government’s penchant for applying the sedition charge against opponents ranging from Hardik Patel in Gujarat to Kanhaiya Kumar in Delhi.

But since the sedition law has been deemed “defective” by the Law Commission, the saffron brigade apparently wants to fall back on the Mother India tag to brand what it once called non-nationalists as being less than reliable.

The energy and inventiveness which it has been displaying in this respect cannot but divert attention from the government’s development plank. But is the government prepared to put the record straight?