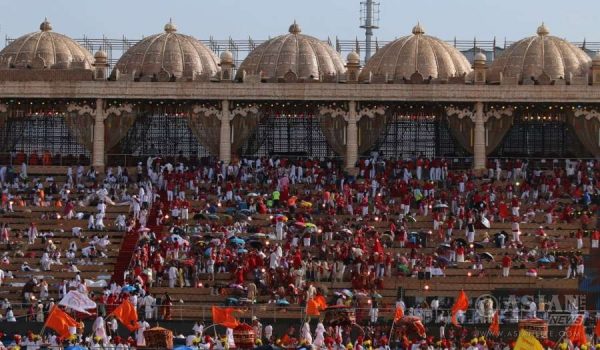 Manoj is deeply unhappy over the Rs.4,000 dished out by the Art of Living (AoL) for acquiring his 1.5 bigha of land along the Yamuna for the World Culture Festival. His lost crops alone were worth Rs.50,000, he moans, not counting his efforts to grow vegetables in an ecologically-disturbed area.

Manoj, who hails from Badaun district in neighbouring Uttar Pradesh, had sowed bitter gourd in two bigha — of which he lost 1.5 bigha — and gourd (loki) in two more bigha. Five bigha makes an acre. The land he lost was close to a main road.

“They came with road rollers, yellow soil, debris and police and started paving the roads. We had no information. First, they threw debris and soil over our plantation and then ran the road roller. Our labour of months was wiped out,” told Manoj.

The 1.5 bigha he lost would have yielded bitter gourd by the month end.

“They gave me Rs.4,000 as compensation. That is nothing. The seeds I sowed for bitter gourd were worth Rs.25,000 a kilo. The labour for ploughing cost Rs.400 a day. Manure and irrigation cost more,” he said.

Santosh Kumar, also from Badaun, and Dayaram from near Varanasi are also crying over their crop loss.

The AoL says it will make up whatever losses anyone has incurred. The National Green Tribunal asked it to pay Rs.5 crore as an initial sum so as to compensate the damage caused to the river area.

Most farmers who cultivate along the winding Yamuna, at an annual cost of Rs.6,000-15,000 a bigha paid to Delhi-based landlords, are from Bihar or Uttar Pradesh.

Legally, the land doesn’t belong to the landlords. It vests with the Delhi Development Authority (DDA) and the UP Irrigation Department.

But the legal ownership is of little consequence to the landless farmers who grow vegetables on the floodplains, providing them a source of living.

“We arrived here some 15 years back and have cultivated since then. At times, the produce is so meagre that it is hard to pay back the lease amount to the landlords,” said Santosh Kumari, also from Uttar Pradesh.

The farmers live in around 3,000 hutments on the Yamuna Khadar. The vegetables they grow include tomato, peas, onion, gourd and bitter gourd, spinach, cauliflower and radish — and is sold in nearby areas.

They say most of them lost large chunks of their crop to the bulldozing by the administration to level a part of the floodplains to carve out a road for the three-day AoL event that ended on March 13.

“Some farmers who protested got the compensation but not all. The roads from one of the entry gates of the event damaged the fields completely. We will have to start from scratch. It would require ploughing and removing stones and granules,” said Dayaram, who too is from near Varanasi and has been cultivating near the Yamuna for 20 years.

“They widened the six feet road into 30 feet. They used road rollers to level the land,” complained another farmer who did not give his name.

The fear of the DDA taking their land away and razing their hutments, of untimely rains and low productivity adds to the insecurity of the farmers.

Some farmers say a total of 1,800 bigha is cultivated along the Yamuna.

“The DDA seized 400-500 acres in 1989 but after we protested returned around 600 bigha… Farmers kept cultivating,” said Chaman Singh, one of those who rents out the land.

The DDA says all farming in the floodplains is illegal and that the former owners of land have been compensated.

“The land belongs to DDA and the UP Irrigation Department. It had been acquired long back,” a DDA official told. As far as the government is concerned, legally there are no farmers in the area.

The reality is different.