Harking to the Indian epic Mahabharata to unravel intricacies of society and politics, Sahitya Akademi winner Nrisingha Prasad Bhaduri says “crude politicians” are as important as their refined counterparts in the rough and tumble of 21st century politics….writes  Sahana Ghosh 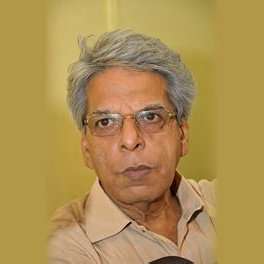 “If you see all the political parties today, they have refined politicians and at the same time, at a lower level, there are counterparts who are what you would call crude and raw. They all have their importance and roles,” Bhaduri told in an interview.

Drawing parallels with the Mahabharata, Bhaduri pointed out that these intricacies are engendered in the longest-known epic poem.

“You see Arjuna, a polished and mature politico, and then you have the raw Bheem,” the Kolkata-based Bhaduri explained, without naming any specific politician.

The Indologist and expert on Indian epics and the Puranas was recently named a Sahitya Akademi awardee for his essay “Mahabharater Astadashi” in Bengali.

Acclaimed for his simple interpretations of the tales in the Mahabharata and Ramayana, Bhaduri has over 20 books to his credit. Notable among them are “Balmikir Ram O Ramayan”, “Arjun o Draupadi”, “Krishna” and “Kunti Ebong Kaunteyo”.

As a researcher and interpreter, the 66-year-old Bhaduri has delved deep into the multiple dimensions of the epics — be it politics, society, women’s empowerment or sexuality.

Based on his understanding of the ancient texts, he underscored the significance of a complex structure.

“The complexity of relationship between society and politics is very important, as seen in the Mahabharata. This complexity and conflict have to be there… if everybody was a sage, there would be no spice.

“If all the moves initiated by the central government elicited a positive response, then where is the complexity?” he asked quoting a Mahabharata sloka in Sanskrit.

Parsing and correlating, the scholar observed that good and bad are never constant and the ultimate idea is how we seek out peace amid the throes of war.

“The Mahabharata shows the quest for peace in the war and that is what we still have to do today,” he said.

Another take-away from the epic is the changing form of secularism and necessity of assimilation.

“The face of secularism has changed over the centuries. Now, we have seen at times, there have been lapses in maintaining a secular society. We have to remember we are a country of diversity,” he said.

For example, he said the Muslims have been here for long.

“They have become part and parcel of Indian society and so the integration needs to be stronger. We have to think about everyone,” he noted.

Debunking myths about hierarchy and caste, Bhaduri said that while in certain parts of the epic, Shudras are viewed as lowly, in other sections, equality of all classes is enshrined.

“If the character associated with Brahmins, i.e., sacrifice and others, are seen in Shudras then they too can be called Brahmins and this benchmark of humanity should be applied in society,” Bhaduri signed off.