CPI-M General Secretary Sitaram Yechury is of the opinion that the government is acting unilaterally, reports Asian Lite News

The Narendra Modi government is taking all major decisions unilaterally without discussing them in Parliament, CPI-M General Secretary Sitaram Yechury has said.

“The government is taking all key decisions on its own and bringing nothing to Parliament, be it foreign policy matters, strategic alliances or defence cooperation,Â” Yechury said.

The Communist Party of India-Marxist leader recalled that although the earlier UPA-II government also signed the 123 Nuclear Deal with the US, it was discussed in Parliament multiple times. “The agreements they have signed now with the US commit India as a junior strategic partner of the US, conducting joint naval exercises along with US and Japan in the South China Sea and allowed automatic entry of FDI in our economy. And there is no discussion in Parliament on such important matters which have lasting impact on our interests,” Yechury said. 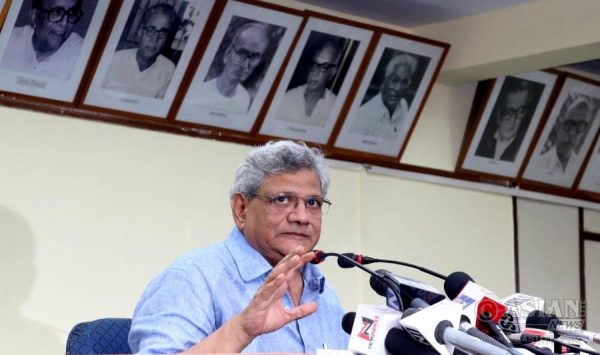 He said while these could be executive decisions, as the Modi government asserts, “the executive is accountable to the Parliament”. The Left leader said that some of these decisions were not exactly in India’s interests, especially when it comes to maintaining healthy and cordial relations with the neighbouring countries including China.

“The NDA government has committed to provide logistical support to the US for any military intervention that the US chooses to undertake. What happened to our independent foreign policy?” He said that while India was trying to replace Pakistan as the US strategic partner in South Asia, Washington continued to provide arms and F-16 jets to Islamabad.

On Foreign Direct Investment, Yechury said the Modi government, in contravention of the BJP’s earlier stand, had given full access to foreign capital including in defence.This, he asserted, would harm the interests of Indian workers.

“Foreign capital now has unprecedented access to our markets, our resources, our cheap labour. Foreign capital can maximize their profits while Indian workers will suffer.” The CPI-M leader questioned the Modi government’s intentions vis-a-vis the Goods and Services Tax (GST) Bill.

“We have been asking the government for two years to hold an all-party meet to build a consensus over GST. But there is no word from the government. They are treating it as a bilateral between them and Congress.“We doubt if they (government) actually want the Bill passed because in the past Narendra Modi himself and another BJP Chief Minister, Shivraj Singh Chouhan, have opposed it.”

Accusing the Modi government of weakening the country’s federal structure, Yechury said the present GST Bill would make states completely dependent on the Centre. He called for safeguards so that the central government won’t hold back money that belongs to the states, particularly those run by parties opposed to the Bharatiya Janata Party.