Stop being silent, let’s get involved in casting away the caste system….writes Bikram Vohra 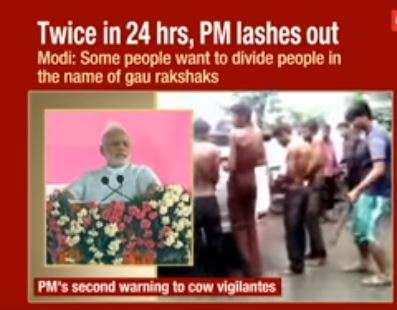 Recently I received a horrendous picture of three men standing cheerfully and arrogantly on the naked body of a man as if he was trophy they had just shot.

Later, I was sent a video of two men being beaten on the soles of their feet as they screamed and a big, fat jerk sat on their backs.

Gross and grotesque and stomach churning.

These vigilantes are easily recognisable; they are flaunting who they are and it is difficult to understand how they are getting away with it. It is obviously caste related. Maybe cow related. Maybe the guy just didn’t lower his eyes.

Usually I never post violence on my page but this one time I have because it underscores an ugliness I would never have expected from my country.

I don’t know what a Dalit is. And I am not being facetious. It is just the way you are brought up. As an army officer’s son I grew up being taught everyone was the same. It never even crossed our minds to look down on anyone (unless he got out first ball or got you run out).

As a child in Wellington, Nilgiris my best friend was the sweeper’s son. Tickler was also the cricket captain and we followed his orders. Sridhar was the son of cobbler and he was our wicketkeeper. There was Vijay who lived in a bus shell with his whole family on cinder blocks (which we thought was cool). His dad was the gardener and coming from Sherwood College, Nainital everyone’s dad was automatically ‘Sir’ and that is how he was addressed.

Fifty years later, if I could meet up with them it would be awesome. They were the best friends a child could have.

And before you pre-empt me yes, they were regularly in my house playing cops and robbers and seven tiles and ‘pithoo’ and yes, Vijay’s mother made those sweet coconut samosas call ‘kajari’ (I think) and no one told us we couldn’t eat them because of some caste barrier.

We then came to Delhi and caste and creed had no role in our home. Our grandparents lived in Dehra Dun and we had dry toilets. One day this man came to the steps but would not enter the house and I was horrified that the cook left his salary on the steps. I brought this up with my grandfather (I was 12) and he tried to give me an embarrassed explanation which I did not buy. The next day, I made friends with the two sons. I suspect my grand dad intended to pull me back and discourage me but my father stopped him. Raju and Chetan grew up waiting for the holidays every year so we could play together. Raju went on from whatever background he had to joining the government as an officer.

As my dad grew older, we had more manpower around us. The ‘s’ word was never allowed and even today, if anyone visits our home and uses it, we stop them immediately.

When I see the rot around us today and the hubris of some ridiculously defunct caste system, I thank my parents for leading us away from such a cerebral marsh and making it alien for us.

Apologising to the domestic help came with the territory. Thanking them was a mandate. You never even considered another option.

I recall one day at dinner in Gwalior my father turned to me and said, “You drove with your driver and one of the boys, right? So have they had dinner? Did you fix their stay? Where will they sleep? Well then, don’t just sit there, I suggest you go do that first and then come and have your dinner.” At that time, I was the resident editor of Indian Express Ahmedabad but I had to leave the table and go do the right thing.

When I was relating some of these caste free stories to a friend, he asked me if for all this big talk, I would have let my children marry outside their caste. Let??

I don’t think it would have even entered the equation. My daughters grew up being even more naive and happily ignorant of caste than myself. If they had fallen in love with any guy from any caste or colour or creed and it made them happy, I would not have batted an eyelid.

During the wedding rituals on both occasions, as it is, the pundit asked us what our ‘gotra’ was and none of us had a clue. We just sort of looked blank and told him not to worry, just carry on, mate.

My friend didn’t believe me and I couldn’t understand why he wouldn’t believe me. He said the most awful thing, ‘You had a relatively privileged life so you could afford to bypass caste.”

What sort of sense does that make?

This exercise is not to drench myself with virtue but to express blessings that we had sensible parents. And there is nothing unique about what I am saying. There are thousands of Indians who don’t give a damn about this blight of caste and they go through life never letting it bother them or touching their code of conduct.

Hundreds of thousands. But they do not get heard. Because the din made by the handful of perverts drowns the silent majority.

Which is why we have to stop being silent. Let’s get involved. When you see these vigilantes doing the dirty, intercede; don’t just stand there taking pictures. We have to go beyond the videos. People know who the culprits are, there have to be special courts and justice should be meted out quickly for anyone who engages in this sort of barbarism.

In fact the most annoying part is the media’s blurring of the naked man on the ground…in there lies the problem. Let’s stop making it less than it is. Unless sensitivities are bruised we will never get over this hump.

You need to be made sick to the stomach.

Imagine if that was you lying there.

One sobering thought. There is not one high caste pure blood Hindu who would not lie down and take the blood of the lowest caste if it would save his life.