Manoj Siva’s ‘Kanthi’ to pay tributes to Malayalam Cinema. The event will be held at Jubilee Theatre at Newcastle on 4th June at 5 pm….reports Asian Lite News. A Must Watch….Don’t Miss It

A team of 50 artistes from the Kerala community under the stewardship of Manoj Shiva will stage  3.5 hr dance drama titled Kanthi portraying various characters from century-old Malayalam cinema. The show focus on the travails of a woman.

Kanthi had the blessings of some prominent personalities such as the famous songwriter-composer Jaya-Vijayan, and the veteran actor Madhu. The much appreciated lyrics of the promo was penned by the noted poet Meera Kamala and the music was composed by the upcoming talent Sachin Mannath. 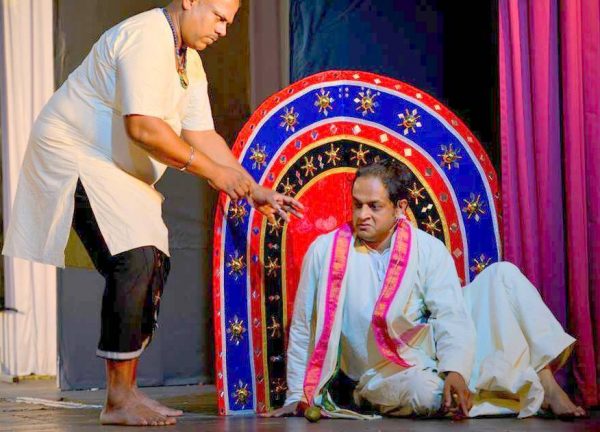 The concept of Kanthi revolved around the conflicts a woman character endures during her life—her love, her dedication to its consummation and the betrayals involved which in the end marks her downfall. Kanthi finds these women and leads them to a new world where there is love without its betrayals and equality in a relationship which is the ultimate freedom. Mira Mahesh excelled as Kanthi along with the haunting music by Sachin.

But the performance unparalleled was by Manoj Shiva who portrayed `Kannan Perumalayan’/Othello, the misled lover who had to kill his wife whom he dearly loved. Every moment he was on stage, his face emanated the struggles Perumalayan faced in making the decision and his unending love masked by the green eyed monster. Manoj Shiva gave the play Kanthi, the fitting final performance, which left the audience in much amazement.

“As a director, it is a matter of pride if my work can touch my audience,” Manoj told Asian Lite. “So, I’m humbled to hear the exemplary things people have had to say about Kanthi – a musical play. The audience have found Kanthi to be entertaining, representative of people from all walks of life, well-articulated, well-prepared, well-directed, resonating the important theme of equality, a thorough depiction of popular Malayalam cinema and a hugely successful staging by amateurs who’ve clearly come across as professionals.”

“What makes me happiest is that Kanthi has made people proud, it has made them feel they can show it to their children and families – this was my goal. To bring about an awareness of the pride we can feel by having equality as our goal and this is my legacy to the generations to come – in my own little way I want to make gender equality a given for our children and their children to come. I want the next generations to be born safe in the knowledge that equality exists.”