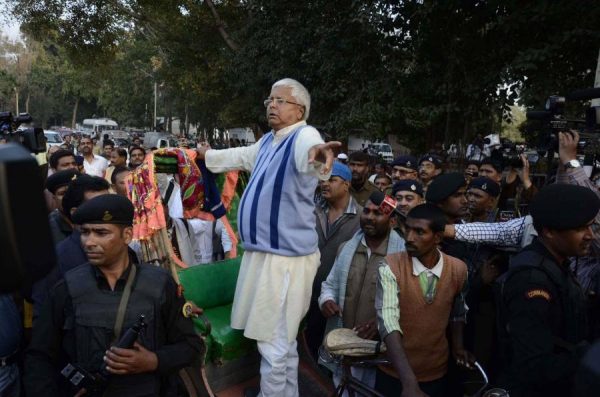 Last week, the JD-U re-nominated Sharad Yadav, and R.C.P. Singh, a former IAS officer considered close to Bihar Chief Minister Nitish Kumar as its candidates for the Rajya Sabha which has five seats from the state to be filled up next month.

Until Monday it was a toss-up between Misa Bharti and Lalu’s former chief minister wife Rabri Devi.

Lalu had fielded Misa, a trained doctor, for the Patliputra seat in Patna in the 2014 Lok Sabha polls, following which senior party leader and then MP Ramkirpal Yadav revolted.

According to RJD leaders here, the party’s national and state parliamentary boards authorised Lalu last week to go ahead with the nominations.

Ram Jethmalani on Sunday joined RJD during his visit to Lalu’s residence here. “I am a friend and protector of Lalu Prasad,” Jethmalani said.

RJD leaders here said Lalu favoured Jethmalani for two reasons: He is a voluble BJP-basher after being expelled from the party in 2013 and he has been helping the RJD supremo in the multi-crore fodder scam cases.

JD-U and RJD along with Congress are members of the Grand Alliance in Bihar.

The Bharatiya Janata Party (BJP) has nominated its senior leader and former state president Gopal Narain Singh as its candidate for the elections to the Rajya Sabha next month.

With 80 legislators in the Bihar assembly, two RJD nominees will easily sail through.

Out of the total five Rajya Sabha seats, Chief Minister Nitish Kumar’s JD-U with 71 legislators will get to send two candidates to the upper house of parliament.

The opposition BJP with 53 legislators will get to nominate one candidate.

The term of five outgoing Rajya Sabha MPs from Bihar expires in July.