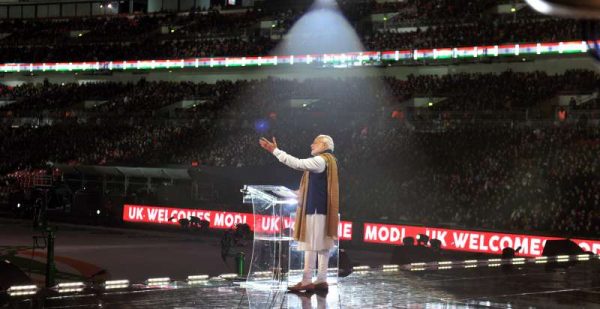 “If Martin Luther King is seen as an image of fight against injustice the world over, B.R. Ambedkar should also be not seen as second to anyone,” Modi said at the foundation stone laying ceremony of B.R. Ambedkar National Memorial in New Delhi.

The prime minister sought to dispel impression that the Bharatiya Janata Party (BJP) is anti-Dalit and maintained that time and again it has been proved that whenever the BJP came to power at the Centre, including under Atal Bihari Vajpayee and in various states, efforts were made to uphold the teachings and values B.R. Ambedkar.

“Still there is a misgiving about us. But the truth is we, in the BJP, always had utmost respect for Ambedkar,” he said.

Maintaining that his government is trying to realise Ambedkar’s dreams by providing electricity in 18,000 villages, he said, “When in these villages you get power supply, do not give credit to Modi (me). Give credit to Ambedkar.”

“These all are his ideas and only in between some people sabtoaged these works,” he said, in a veiled cricticism of Congress. He lamented that even after 60 years some villages in India remain in darkness.

“Babasaheb was the voice of the marginalised,” the prime minister said, adding that the founding father of the Indian Constitution should not be seen as a leader of any caste.

“Rather he was a protector of all human values,” Modi said.

Modi also praised Ambedkar’s vision for the development of the poor and middle class and said he also made a right synthesis between the welfare of labour force and industrialisation.

“He had a vision to realise India’s maritime resources, power sector and many things… He always wanted people to be educated,” Modi said, adding: “Ambedkar gave inner power to people by compelling people to be knowledgeable.”

“In order to realise one of his dreams, I will launch a technology on April 14 that will help enable farmers get updated information about market rates of agri products,” Modi said.