According to one memorandum of understanding (MoU), Qatar will invest in India’s National Investment and Infrastructure Fund (NIIF).

The government had set set up the Rs 40,000-crore NIIF last year for enhancing infrastructure financing in India.

Another MoU was signed between India’s Ministry of Skill Development and Entrepreneurship, and Qatar’s National Qualifications Authority/Supreme Educational Council, on cooperation in skill development and recognition of qualifications.

A third MoU calls for Cooperation in tourism between the two countries.

Another MoU was signed on cooperation between India and Qatar in the field of health.

An agreement was signed on cooperation and mutual assistance in customs matters.

A first executive programme for MoU in the field of youth and sports between the two countries was also signed.

Ahead of Sunday’s delegation level talks, Modi was accorded a ceremonial welcome at the Emiri Diwan here.

Modi’s is the first prime ministerial visit from India to energy-rich Qatar since the then Prime Minister Manmohan Singh’s in 2008. 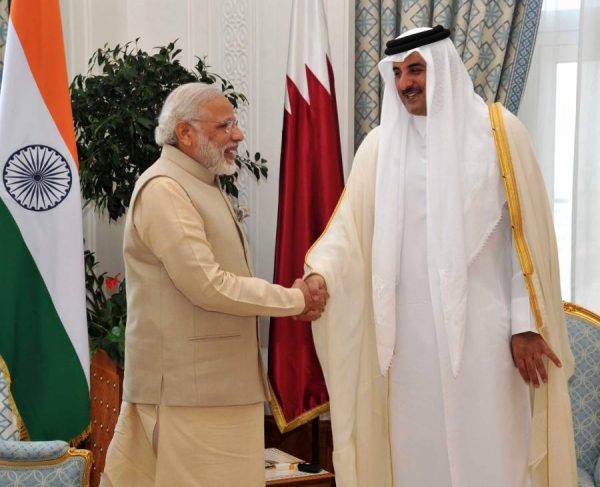 This is Modi’s third visit to a GCC country. He visited the United Arab Emirates and Saudi Arabia earlier.

Earlier on Sunday, Modi attended a meeting of Qatari business leaders and invited them to invest in India.

Modi will also interact with the Indian community here later in the day. Qatar is home to around 630,000 expatriate Indians — comprising the single largest group of migrants in Qatar.

The Prime Minister, who arrived here on Saturday from Afghanistan on the second leg of his five-nation tour, visited a health camp organised for Indian workers here soon after his arrival.

On Sunday evening, Modi will depart for Switzerland on the third leg of his tour that will also take him to the US and Mexico.