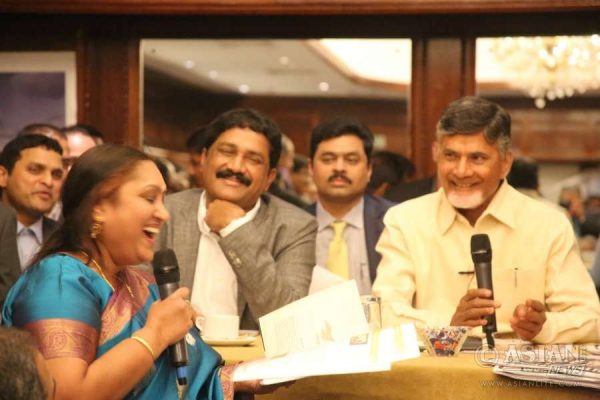 At the annual convention of the Telugu Desam Party (TDP) at Tirupati, one couldn’t miss the mood of grassroots party activists: it was anti-Centre, if not anti-BJP. Still, TDP chief and Andhra Pradesh Chief Minister N. Chandrababu Naidu is pragmatic enough to realise that negative vibes with the centre won’t do.

Even as the Narendra Modi government celebrated its two years in office, the TDP cadres in Andhra Pradesh made it clear that they want the central government to deliver on the commitments made when the state got bifurcated.

The TDP is a partner in the BJP-led National Democratic Alliance (NDA), but the cadres at the three-day ‘Mahanadu’ are not parroting the Modi government’s “achievements” and schemes. They are much more concerned about the development of the state, which hinges on how the Centre supports the Chandrababu Naidu government’s agenda.

“The division of Andhra Pradesh was mishandled. The Congress-led UPA government went ahead with the reorganisation in an undemocratic manner and in a hurry for political gains. Now the Centre is not sure about giving special category status,” one Andhra Pradesh minister said.

“The state administration is seriously burdened with several challenges, all of them resulting from omissions, commissions, contradictions and inadequacies in the Andhra Pradesh Reorganisation Act 2014,” the minister added.

In their speeches, the district-level TDP activists also talk of challenges facing the state government. Their list is a lengthy one — from the state being without a capital city to the problems in the economy, and the need to create jobs and wealth as has been the people’s expectation.

And in that respect, TDP seems to be putting the ball in the Centre’s court, playing up the ‘Telugu pride’ to the hilt.

While the TDP leaders are backing their supremo Chief Minister Naidu, they argue that there’s growing disenchantment among the people and the Centre must immediately step in to fulfil the commitments in the Andhra Pradesh Reorganisation Act.

“Despite financial constraints, Chief Minister N. Chandrababu Naidu has mobilised the public and activated the government machinery. He is making tireless efforts to achieve faster economic growth that is sustainable. However, there is lack of institutional and financial resources,” TDP farmers’ wing chief V. Pratap Reddy told IANS.

“Prime Minister Narendra Modi should support Andhra Pradesh till we achieve a level playing field with our neighbours in terms of development and human resource indices,” Reddy added.

“The people of Andhra Pradesh never wanted bifurcation of the state. Now everyone knows that development of the state is dependent on the central government fulfilling the commitments made with reference to the Reorganisation Act,” said E. Sujatha, a TDP leader from Visakhapatnam district.

In this context, she said the message from the TDP’s annual convention ‘Mahanadu’ is not favourable for the BJP which is “too much busy in celebrating two years of the Modi government”.

“Prime Minister Modi talks about being a catalyst of development. But in Andhra Pradesh the need of the hour is creation of an ecosystem for development and provide appropriate financial package to help us achieve the state’s potentials.” Sujatha told IANS.

So will the TDP jump the boat and quit NDA? The question hangs heavy here at the ‘Mahanadu’. However, senior leader and TDP representative in Delhi K. Ramamohan Rao rejected such a possibility.

“We do not want to be like a complaining partner in the BJP-led NDA. Granting of ‘special category’ status to Andhra Pradesh is a pending issue. But we want to look beyond and we will continue to cooperate with the Centre. We want their assistance for the backward regions of coastal north Andhra and Rayalseema,” he told IANS.

It may be noted that even as the demand for central assistance grows in Andhra, a BJP document claimed that a lot of funding was provided to the state.

“Even for bridging the revenue deficit, the Centre has released Rs.2,304 crore in 2014-15 and later Rs.500 crore,” stated the BJP document which was released in Andhra Pradesh on the occasion of Modi government’s two years.

The document also stated that the central government has further released Rs.7,430 crore as part of Rs.22,113 crore deficit that the 14th Finance Commission projected for 2015-20.

While the tone of the BJP document is not hostile, there’s an undercurrent of antagonism between the two sides at the grassroots level.

For example, a few days back a section of BJP leaders criticised Chief Minister Naidu for planning a Rs.52,000-crore capital city in Amravati. The plan should have been more realistic, they said.

But the maze of demands, claims and counter-claims doesn’t seem to have any effect at the top level of leadership.

According to observers here, Chandrababu Naidu is a pragmatic leader, who understands the political reality clearly. Naidu knows that confrontation with a powerful Centre won’t serve any purpose, the observers said.

And that’s the message which the TDP chief is also sending across to party workers, urging them “not to fall in the trap of confrontation” with the Modi government over ‘special category’ status to Andhra.

The chief minister keeps referring to his May 17 meeting with the prime minister and says that Modi has “assured” him to look into the requests of the state.

Party insiders say that the TDP was founded on a strong anti-Congress plank. Therefore, the party cannot join hands with the Congress.

According to these TDP leaders, nothing will happen in the next two-three years in the so-called Third Front. Bihar Chief Minister Nitish Kumar is an ally of the Congress and TDP cannot go with him. Only Mamata Banerjee in West Bengal has had a good equation with the TDP in Parliament.

So in these circumstances, Chandrababu Naidu will remain in the NDA and continue to cooperate with the Centre. And in return, he would try to extract maximum benefit for Andhra Pradesh.