Writers’ Buildings renovation yet to start even after three years….Sahana Ghosh from Kolkata 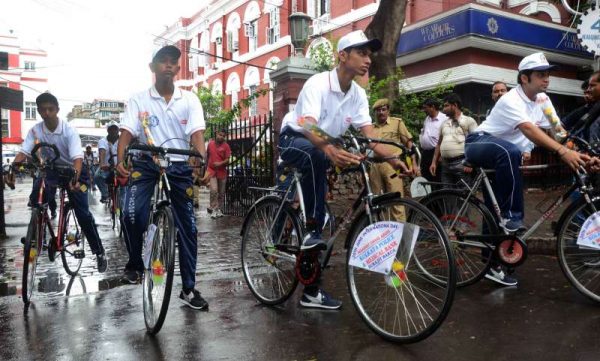 As the glossy facade of Nabanna – the temporary seat of the West Bengal government in neighbouring Howrah – prepares to welcome Mamata Banerjee for her second term as chief minister, the permanent secretariat – the historic Writers’ Buildings – stands forlorn here, yet to see any of the promised renovation even three years after the hype and promise surrounding the project.

Midway into its first term, the Banerjee government in 2013 shifted the secretariat out of the 236-year-old Writers’ — from where the British once ruled India — to allow restoration of the heritage complex.

The then chief secretary, Sanjay Mitra, had hoped the renovation and restoration will take between six months to one year.

The facelift of the red, charming edifice, built around 1780, is part of Banerjee’s “London dreams” — her grand idea of sprucing up the eastern metropolis on the lines of the British capital.

On May 27, Banerjee will be sworn in chief minister again after leading the Trinamool Congress to a resounding victory in the assembly polls. The action will then shift to Nabanna, from where the state government will be run till the Writers’ renovation gets complete.

Writers’ was handed over to Jadavpur University’s department of architecture and on board is the Indian National Trust for Art and Cultural Heritage (INTACH). The department has also sought consultations with heritage conservationists from countries like Australia and Germany.

The team submitted detailed reports to the government last year. However, the actual restoration seems to be stuck in government red tape and indecisiveness.

“They have not yet carried it forward. No renovation work has started yet. We have submitted the detailed plans they had asked for,” Madhumita Roy of the university’s department of architecture, who was leading the project, told IANS.

She has joined a private varsity on lien but still remains associated with the restoration.

But Roy was confident that the remodelling will start in earnest.

“The plans are all done. The building needs urgent restoration. The job must be done immediately,” she stressed.

INTACH West Bengal chapter’s GM Kapur, who had dubbed it as a “landmark restoration project in the country”, echoed a similar view.

A silent witness to India’s and Bengal’s history, the neo-classical (mid-18th century) architectural icon at the city’s bustling Dalhousie intersection with its trademark colour and majestic Corinthian columns was the first three-storied building in Kolkata (then known as Calcutta).

Prior to the temporary shifting of the Bengal secretariat, the mini-township of sorts (with a built-up area of around 550,000 square feet) used to house 34 departments and other offices with approximately 6,000 employees.

Almost rectangular, the gigantic complex has a main linear block, including the rotunda, and five other primary blocks that are heritage structures.

Between 1945 and 1947, four new blocks were added connecting the main ones. Finally, post-Independence, another set of four blocks were constructed in the area ensconced by the earlier buildings.

The vision is to transform it into a green building, Roy said.

To modernise the structure, energy-efficient technologies like water harvesting and solar panels will be incorporated in sync with passive architectural interventions to ensure that ample light and air enter, said Roy.

She said a part of the plan is to demolish structures built after Independence that have cramped up the interiors and obstructed ventilation.