Till now, the Hindutva camp hadn’t trained its guns on one so high who is not a politician. There is little doubt, however, that the Sangh Parivar’s motive is political. Will Modi bow to RSS on Raghuram Rajan? Weekly Column Political Circus by Amulya Ganguli

In addition to the NGOs, including the one run by Teesta Setalvad, the saffron brotherhood’s new target is a formidable one – Reserve Bank of India (RBI) Governor Raghuram Rajan.

Till now, the Hindutva camp hadn’t trained its guns on one so high who is not a politician. There is little doubt, however, that the Sangh Parivar’s motive is political.
The attack on Rajan is not a frontal one. It is a flanking movement with none other than the new Bharatiya Janata Party (BJP) Rajya Sabha member, the perennially combative Subramanian Swamy, leading the charge.

It is not clear if the targeting of Rajan has the approval of the BJP’s top brass, for there are conflicting indications.

While Finance Minister Arun Jaitley disapproves of the personal nature of the attacks, he has been silent on the question of extending Rajan’s term beyond September considering that Swamy wants his immediate dismissal.

However, the problem with Swamy’s offensive – he has accused Rajan of acting at the behest US multinationals to damage the Indian small and medium industries – is that the voluble MP cannot always be taken seriously.

The reason is that he is a maverick to beat all mavericks. As a result, he is perceived of as something of a loose cannon who can go off at a tangent from his party’s line.

As much is clear from his earlier backing of the disgraced godman, Asaram Bapu, to the more recent call for building the Ram temple by the year-end, about which the BJP has been more than circumspect.

Moreover, he is supposed to have been elevated to the Rajya Sabha only to serve a specific purpose – that of needling the Nehru-Gandhis – and not open fire at random.

Swamy has been performing the first task with considerable zeal, pursuing the allegations against the Congress’s first family in the National Herald and AgustaWestland cases.

More recently, he has called upon the Enforcement Directorate to probe the supposed transgressions of the business deals of Robert Vadra, the first family’s son-in-law.

In the midst of these endeavours, the sudden turning of his attention to Rajan is surprising.

In view of the government’s eagerness to maintain friendly ties with the corporate sector, the latter’s unfavourable reaction to Swamy’s antics was only to be expected. The Confederation of Indian Industry has already expressed its displeasure.

None of this is unexpected, for Rajan is known to be a favourite of India Inc. and of the media, especially the financial newspapers.

Narendra Modi’s evasive statement on the issue – he told Wall Street Journal that Rajan’s tenure can be of no interest to the media – is unlikely to clear the scene.

In any event, Modi’s probable view is that nothing should be of interest to the media, which explains why he doesn’t hold any press conferences.

The hullabaloo created by Swamy appears to have persuaded Rajan to decide not to seek a second term although he has described the controversy as evidence of a “noisy” democracy and the “sign of its vibrancy”.

It is possible that Rajan’s observation about India being the king in a land of the blind hasn’t pleased the BJP.

Besides, he is something of an odd man out where the Hindutva camp is concerned, being a typical representative of the urbane, English-speaking, secular establishment that is vastly different from the Hindi-speaking, conservative-minded present-day rulers.

It is not impossible, therefore, that the Rashtriya Swayamsevak Sangh (RSS), the BJP’s mentor, wants to see the back of him.

After all, the RSS has succeeded in placing its nominees in most of the institutions – the Indian Council of Historical Research (ICHR), the National Book Trust, the Film and Television Institute, the Central Board of Film Certification, and so on.

The objective behind all these appointments was, first, to find sinecures for its followers and, secondly, to peddle the pro-Hindu agenda. So, why should the RBI be left in the hands of a purported secularist?

It goes without saying, however, that if India Inc’s blue-eyed boy quits office, the initial effect on the market will be worrisome. 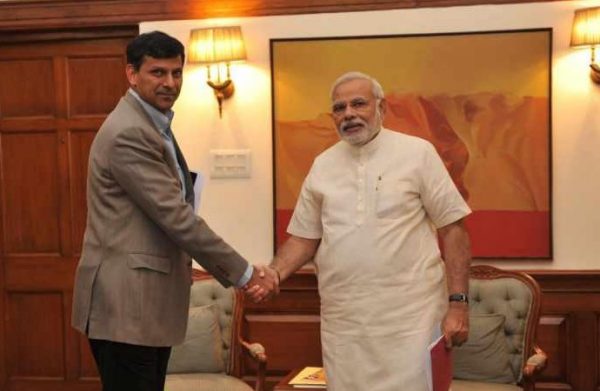 That is not something which Modi will appreciate. But he has generally had to walk a tight rope between the predilections of the RSS and his own more open-minded attitude. There has been a constant give-and-take between him and the Nagpur patriarchs in this respect.

In some matters, Modi has had the upper hand such as in persuading the saffron fundamentalists to go easy on their ghar wapsi and love jehad campaigns.

In others, he has given way to the RSS as, for instance, in the appointments of unworthy nominees to the ICHR and other institutions.

The Rajan affair will be a major test for Modi. Will he bow to the RSS or will he allow his pro-business instincts to prevail ?