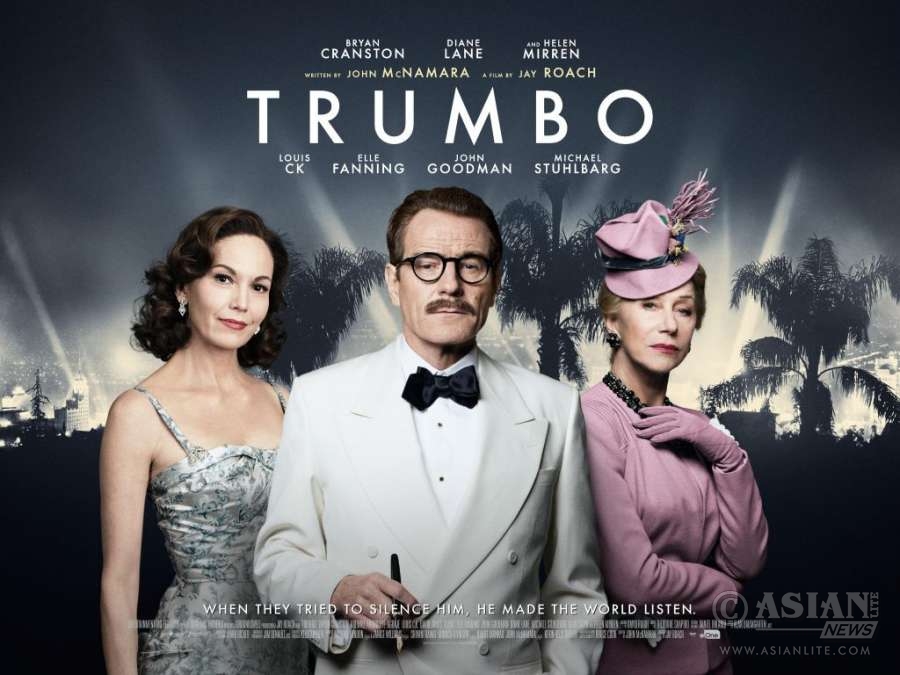 A character driven film, “Trumbo” is the flattering tale of Hollywood’s great screenplay writer, Dalton Trumbo, who fought the system during the height of the cold war between the US and USSR. He was blacklisted and ostracised for his political beliefs. It is also a reminder of how democracy can fail at times.

Scripted by John McNamara and based on the oft-criticised biography of the same name by Bruce Cook, the film is narrated in a simple, straightforward manner covering the thirteen year period from 1947 to 1960.

The narration begins when Trumbo, at the peak of his career and Hollywood as “one big family”, is threatened with a labour dispute between the Conference of Studio Unions and the major studio managements.

It is only after taking an outspoken, front-line stand that Trumbo attracts the attention of the columnist Hedda Hopper, whose idea of patriotism involved stamping out the threat of communism in the industry. She personally campaigned to get the communist sympathisers banned from the system.

While Trumbo admits in private to his daughter that he is a communist, he refuses to go public about his political opinion. But, it is when he defies the House Un-American Activities Committee in Washington DC, that he is held for “conspiracy to corrupt democratic values in particular”, and is forced to serve jail time.

When Trumbo is finally released 11 months later, he is forced to sell his ranch and embrace humility. How he survived the years that followed till the ban was lifted in 1960, forms the crux of the tale.

The personality of Dalton Trumbo shines through the screenplay. The crisp, cutting edge dialogues are ordinary but effective. The one in particular is when he tells his co-writer Arlen Hird when they argue, “The radical works hard with the purity of Jesus, but the rich guy wins with the cunningness of Satan”.

With a hunched posture and a cantankerous demeanour, Bryan Cranston as Dalton Trumbo is extremely believable. He exhibits a fine array of emotions that reveal his complex life as the principled writer who is put through humiliation and adversity.

Director Jay Roach’s plot, etched with numerous dramatic highs and lows and crescendo pitched dialogues that document seminal moments of this topsy turvy period in tinsel town, gets presented to a realistic degree. He pays great attention to the period detail with archive footage, some of it real and some of it shot for the film, by cinematographer Jim Denault.

The visuals are accompanied by Theodore Shapiro’s sharp score that enhances the viewing experience.

Unfortunately, since this is only a slice of the writer’s life, what does not get inserted into the plot’s framework gets bookended as text on the screen and is a bit disappointing.

Overall, the film is worth a watch for the fine performances.