From Dileep Kumar to Marx to Gandhiji to Modiji….Lord Desai’s favourites topics are colourful like a rainbow. His down to earth personality and eminence in economics besides politics have enabled him to adorn one of the most respected positions in the British society today…. writes Rajitha Saleem 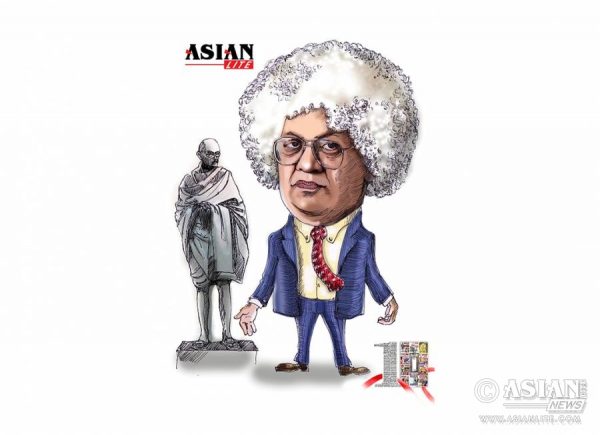 A stalwart in Marxian Economics, Lord Meghnad Desai is one of most prominent economist in the world today. An alumni of the University of Berkeley and the London School of Economics, Lord Desai negates the belief that Marx was against capitalism.

“In fact, Marx wrote about capitalism and its ups and downs. The communism which is often equated with Marxism was actually propagated by Lenin. Marx actually wrote about the socialism that will come after capitalism,” said the eminent Lord.

It is explained more in Desai’s book Marx’s Revenge: The Resurgence of Capitalism and the Death of Statist Socialism which stated that globalisation would tend toward the revival of socialism, published in 2002. He believes that Marx is often most misunderstood on the subject of capitalism.

Lord Desai worked as an Associate Specialist in the Department of Agricultural Economics, University of California, Berkeley, California. He then became a lecturer at the London School of Economics (LSE) in 1965. At the LSE, he taught econometrics, macroeconomics, Marxian economics and development economics over the years. He wrote his first book Marxian Economic Theory in 1973 followed by Applied Econometrics in 1976 and Marxian Economics, a revised edition of his 1973 book in 1979. He wrote Testing Monetarism, a critique of monetarism, in 1981.

Explaining about his new book, Hubris: Why Economists Failed to Predict the Crisis and How to Avoid the Next One, he says that with the economic theories of Marx, Friedrich Hayek, Nikolai Kondratiev, economists may be able to predict the ups and downs of an economy. “Basically it means whether it is recession or economic progress, nothing remains forever. Every recession will be followed by a period of economic progress and vice-versa,” added he.

A seasoned Labour politician, Lord Desai believes that people have lost their faith in Prime Minister David Cameron and the Tory party in the wake of the Panama Papers controversy. “It is interesting to note that Labour Leader Jeremy Corbyn has emerged as the most trusted person now among the people in the UK, even when people may not agree with many things that he says,” said Lord Desai.

According to him, Jeremy Corbyn is a very principled man and is viewed as man with integrity and honesty than the whole of Tory party, even when he might not have the leadership qualities to win an election.

Asked whether the taxation policies need a revamp in the wake of the Panama Papers and the recent Facebook and Google tax issues, Lord Desai commented that the conflict is not restricted to UK alone and rich people in all the other countries are also doing the same.

“What we need is international collaboration which would not allow certain countries to be tax haven and result in establishing overseas offices only to reduce the tax on profits shown. What we need is global regulation of the cash flow for which co-operation of other countries are essential. There is little a single country can do,” commented Lord Desai.

Lord Desai reiterated that UK should remain in the EU, as the idea of a united Europe and the integration seen among the European countries are better than UK being the `grim sulky member’ of the European Union. He said that it was a sign of prosperity for England that people from other countries flock to UK to make money. “It is mainly an internal quarrel in the Conservative party which has come into the fore. The public of UK always wanted to remain,” added Desai emphasising that he had chosen to vote to remain even in 1975.

Commenting about the exuberant Indian economy, Lord Desai said India is one of the fastest growing economy and that it will take time for the effects of Prime Minister Modi’s policies to be seen. He also added that with careful policies of `Make in India’ and the new start-ups, India can ensure a steady economic progress of 9%.

An ardent fan of the Indian actor of yesteryears, Dilip Kumar, Lord Desai has written a book about him, `Nehru’s Hero: Dilip Kumar in the life of India’. He has described the book as his “greatest achievement”.

Examining Kumar’s films, he discovers parallels between the socio-political arena in India and its reflection on screen. He discusses issues as varied as censorship, the iconic values of Indian machismo, cultural identity and secularism, and analyses how the films portrayed a changing India at that time. He said that Dilip Kumar’s influence has been so great that many actors who followed like Manoj Kumar, Rajendra Kumar and even Amitabh Bachchan have followed the great actor’s footsteps.

“Dilip Kumar’s films from Mela to Naya Daur to Ganga Jamuna reflects the changing socio political scene in India at that time,” he added.

In 2003, he retired as Director of the Centre for the Study of global governance, which he founded in 1992 at the London School of Economics (LSE), where he is now Professor Emeritus. He was Chairman of the Trustee’s Board for Training for Life, Chairman of the Management Board of City Roads and on the Board of Tribune magazine. Lord Desai was also a founding member of the Development Studies Institute at the LSE in 1990.

Lord Desai has published Rethinking Islamism: Ideology of the New Terror (2006), The Route to All Evil: The Political Economy of Ezra Pound (2007), a novel Dead on Time, (2009) and The Rediscovery of India (2009). Lord Desai serves as the founder chairman of the Meghnad Desai Academy of Economics at Mumbai.

He is living in London with his wife Kishwar Ahluwalia.