Sruthi, an art and cultural forum created to promote arts from the South Indian state of Kerala in UK is conducting its 12th annual event on Saturday April 16. The event would be held at the East Durham college at 2 PM. This year, Sruthi pays homage to the great literary genius of the Malayalam poet ONV Kurup who passed away early this year, who had inaugurated Sruthi on 1st Ocober 2005.

Sruthi events commence with a special introductory tribute to late Shri ONV Kurup. This will be followed by Janani Namasthubhyam, a dance performance traversing the cycle of Creation, Existence and Destruction of life and nature, seeking harmony among the five elements for the longevity of Mother Earth. “The performance laced with instrumental fusion music and poetry probes our mind on the unfathomable impact of human activities for the sake of insatiable greed and power.” 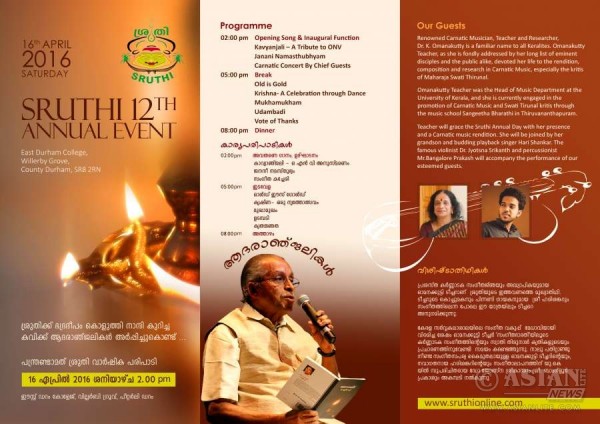 Prominent among the guests who would grace Sruthi is the renowned Carnatic musician, teacher and researcher Dr K Omanakutty, who is a familiar face among the art lovers of Kerala. Omanakutty teacher as she is fondly addressed by her disciples and students have dedicated her life to the rendition and composition of carnatic music, especially the kritis of Maharaja Swati Thirunal.

Omanakutty teacher was the head of Department of Music at the University of Kerala, and she is currently engaged in the promotion of Swati Thirunal Kritis through her music school Sangeetha Bharathi in Thiruvananthapuram. On the day, she will be joined by her grandson and budding playback singer Hari Shankar. Famous violinist Dr Jyotsna Srikanth and percussionist Mr Bangalore Prakash will accompany Dr Omanakutty’s performance.

The Sruthi music team is moving away from the trend in recent years, to present a musical journey to remember and celebrate the work of some exceptional, but lesser known singers of yesteryears in `Old is Gold.’ The programme comes from the belief that singers who have decorated the golden era of Malayalam cinema and drama scene in the 1950s and 1960s with some immortal classics, but often not remembered as much as some of their peers are sadly deprived of the deserved recognition. 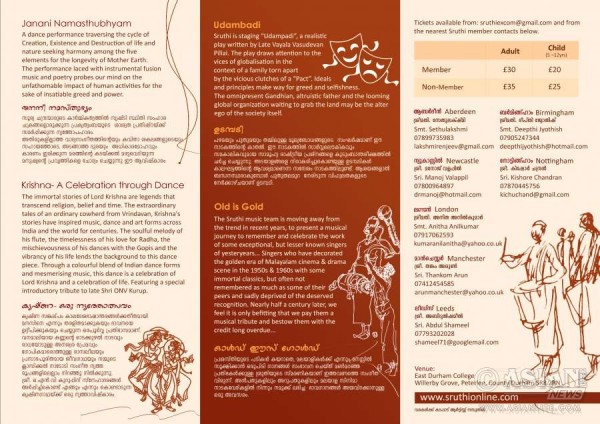 The music event will be followed by the celebration of Krishna through dance. The immortal stories of Lord Krishna are legends that transcend religion, belief and time and the extraordinary tales of an ordinary cowherd from Vrindavan have inspired music, dance and art forms across India and the world for centuries. Through a colourful blend of Indian dance forms and mesmerising music, Sruthi presents a dance which is a celebration of Lord Krishna and a celebration of life.

The highlight of the evening is `Udambadi’, a realistic play written by Late Vayala Vasudevan Pillai. The play draws attention to the vices of globalisation in the context of a family torn apart by the vicious clutches of a `Pact’. “Ideals and principles make way for greed and selfishness. The omnipresent Gandhian, altruistic father and the looming global organization waiting to grab the land may be the alter ego of the society itself.”

Tickets are priced £35 for an adult and £25 for a child and would be available from sruthiexcom@gmail.com.