Asian Lite News Desk compiles a selection of events and programmes to attend this week. Please send your events details to newsdesk@asianlite.asianlite.uk 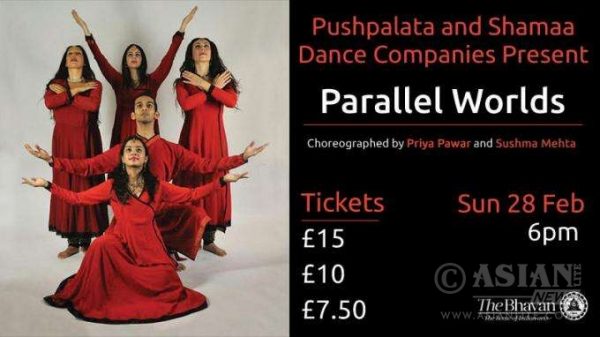 A collaborative dance performance by the students of Shamaa Dance company and Pushpalata Dance Company will explore the relations and commonalities of Hinduism and Islam through the dance forms of Sufism, Kathak and Odissi in Parallel Worlds, which will be performed at 6.30 on Sunday, 28th February

Aligarh:  Biographical drama film directed by Hansal Mehta, and starring Manoj Bajpai and Rajkummar Rao as leads. The film is based on the life of Indian linguist and author Dr. Shrinivas Ramchandra Siras, and Journalist Deepu Sebastian. Dr. Siras was suspended from his job because of his sexual orientation. Siras was the professor of Marathi at the Aligarh Muslim University. After successfully appealing his suspension, he died in suspicious circumstances. Manoj Bajpai plays the role of Siras,  and Rajkummar Rao plays a journalist.

Neerja inspired by a true story of a flight attendant who saved passengers’ lives during a hijacking, on September 5, 1986, Pan Am flight 73, is running successfully in cinemas across UK. This gripping biopic of the youngest-ever recipient of Ashoka Chakra award is the second feature from award-winning commercials director Ram Madhvani, and stars Sonam Kapoor.

Jayam Ravi stars in the first ever Tamil apocalypse movie, Miruthan, which runs to full houses in Cinemas in the United Kingdom. In this film, he is cast opposite rising star Lakshmi Menon of Vedalam fame.
·       Channo Kamli Yaar Di, an emotional Punjabi drama about a pregnant woman who travels to Canada in search of her missing husband, is being aired for the second successful week in Cineworld.

Fitoor, the imaginative Hindi reworking of Dickens’ Great Expectations set in the Kashmir valley, has been running successfully for three weeks now.

Sanam Teri Kasam, a sizzling Hindi romance is also being aired this weekend in Cineworld.

Bharatiya Vrund Gaan, the first Indian Music adult choir of the UK (BVG-The Indian Choir) was founded by Manchester-based composer Rakesh Joshi. B V G will perform popular compositions of Indian music and songs written by well known poets of India. The choir comprises over 50 talented singers from the North-West and Greater London. The songs are in Sanskrit, Hindi, Gujarati, Bengali, Malayalam and Marathi languages and include popular group songs, classical raga-based compositions, Tarana, divine chants of Vedic tradition and songs of the four seasons. The Choir will be performing some of their new compositions.

‘Ameen is vibrant, inspiring and the most promising Sarod player in the country’ – Hindustan Times. Ameen Ali Khan is an outstanding Indian classical musician belongs to the seventh generation of great musicians. His father was the celebrated Sarod artist Ustad Rehmat Ali Khan and grandson of the great Ustad Hafiz Ali Khansaheb. Sarod Maestro, Ustad Amjad Ali Khan is his uncle. Ameen is known for his passionate and moving style of playing and his aesthetic purity and tradition. He has played at several major festivals all around the world.

Accompanying him is Shahbaz Hussain, one of the outstanding tabla players of his generation. Shahbaz started learning the tabla at age five with his father, the late Ustad Mumtaz Hussain – a prominent vocalist. He trained under late Ustad Faiyaz Khan (Delhi Gharana), late Ustad Shaukat Hussain Khan and the late Ustad Allah Rakha Khan( Punjab Gharana). Shahbaz is known for his traditional skills as well as the ability to project those skills to more contemporary styles. His solo performances have gained recognition all over the world
Presented by Sama Arts Network in association with The Nehru Centre.
Sarangi and vocals – Nicolas Magriel & Jhalib Millar
Wednesday 02 March – 6:30 pm

Nicolas Magriel, born in New York, has been playing the sarangi since 1970. He has studied with several distinguished sarangi players including Pandit Gopal Mishra, Ustad Abdul Latif Khan and Ustad Mohammed Ali Khan and has researched on various aspects of Hindustani music. He also studied vocal music with the renowned khayal singer and musicologist Pandit Dilip Chandra Vedi, dhrupad singing with Ustad Fayazuddin Dagar and khayal with Ustad Aslam Khan. He has performed widely in the UK and Europe as a soloist and as an accompanist to vocalists and Kathak dancers, appeared many times on television and contributed sarangi for numerous film and theatre scores.
Presented by Sama Arts Network in association with The Nehru Centre.

Susmit Sil is from a family of musicians with musical heritage spread over six generations. He was initially trained by his father Shri Kalyan Kumar Sil who was a Tabla player and later by Pandit Biswajit Roy Chowdhury and Pandit Mallikarjun Mansur.
Saleel Tambe has been playing Tabla as a soloist and as an accompanist to many renowned musicians and dancers. Saleel’s parents are noted exponents of Indian classical music, Dr. Shashikant Tambe an acclaimed vocalist and Jayashree Tambe, an established Kathak danseuse. He was trained by Pt Ramdas Palsule, a senior disciple of Taalyogi Pt Suresh Talwalkar.
Roop Kathak – Rujuta Soman
Friday 04 March – 6:30 pm

Rujuta Soman is one of the leading Kathak dancers of India and is an empanelled artist of the Indian Council for Cultural Relations (ICCR). Rujuta has also explored the nuances of Taal and Laya under the guidance of Taalyogi Pt. Suresh Talwalkar and Guru Shama Bhate. The Rujuta Soman Cultural Academy (RSCA) founded and managed by Rujuta trains students of all ages from different cities and countries. The RSCA aims to extend the boundaries of Indian traditional dance and create a new benchmark in the aesthetics of presentation by using state-of-the-art technology and innovative dance techniques. The presentation will highlight technical aspects of Kathak, some set to unusual time cycles and choreographed by her Late Guru Dr. Rohini Bhate. The programme includes a short talk on Kathak in Hindi Cinema and some performances set to movie songs based on classical music.