Less than 50 days to go for the EU referendum – discussions around staying or leaving the EU have heightened in the recent weeks, with both sides putting forward their case. Asian Lite caught up with Baroness Sandip Verma, Parliamentary Under Secretary of State at the Department for International Development and one of the vocal voices supporting the IN campaign. The Baroness believes that “each and every one of us have an opportunity and it is important we make use of this vote”….writes Manish Tiwari 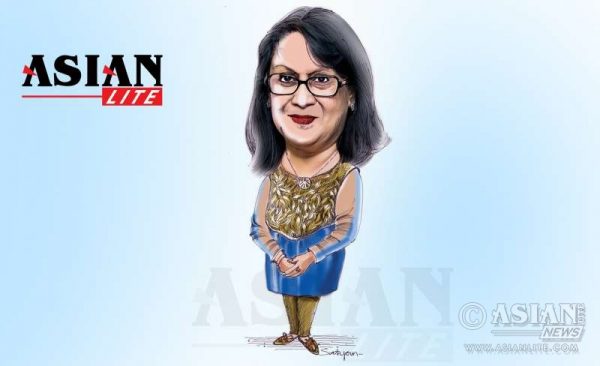 While the Leave campaigners have spoken about how leaving the EU will make Britain a stronger economy and a more secure country, Baroness Verma is of a different opinion: “We are part of a 500 million people bloc. The EU is a strong negotiating bloc for countries like India and China to come and work with. We have access to intelligence sharing with our European partners. We are the lead bloc in looking into environmental issues and climate change. As a bloc of countries we have done a huge amount in aid and development. I think as a bloc we are the biggest donors to the developing world. The recent example was when we did the Syrian conference not long ago – we raised in one day the biggest amount ever USD 11 billion to make sure children in Syria, Lebanon, Jordan had access to education, so we don’t lose our generation of young people to conflicts.

“So, you can see the benefits of it, you can see employment, security, environmental issues being tackled, the rights of workers being protected – all these things are positives.”

When it comes to people questioning if it is an expensive decision to stay in the EU, she claims: “For every £1 of tax payer money it’s just a tiny bit over 1p which is paid to the EU. But the benefits are high.”

While she does agree there need to be some reforms in place, she is positive after Prime Minister David Cameron’s visit to Brussels and the reforms he came back with. She said: “There are lots of things we could get better at in terms of reforming the EU and that is something we all should be working towards, which is part of the journey and what David Cameron has managed to do is get others to start saying that ‘yes we want to reform the EU’. He came back with a lot of reforms and we should actually look at that as successes.”

In fact, even when it comes to trade, she believes there are more positives to gain out of being in the EU and with the South Asian entrepreneurial community at the heart of the matter – Baroness Verma is not only speaking for herself but on behalf of the community. “I have spoken to lots of people within the Asian community – businesses, general professionals and all of them seem to be of the view that for as long as they are in the country and being able to access the EU has been beneficial to them because of the great bloc of people and the freedom to move amongst 500 million people is a great advantage. By nature, we are an internationalist community – we go all over the world so we know what it is like to be able to move around the world.”

It is not just the South Asian community but countries such as India, Japan and China as well who view UK as a gateway to the EU.

“India sees UK as part of the EU. UK has some real special relationships with India, Pakistan and Bangladesh but it’s also because it’s part of the EU that UK is seen as a gateway to other countries. So businesses to those countries are probably much more keen to trade with us because of the actual advantage of being able to open to other markets.

“I think what you have got to worry about is once you come out of the EU is that each country will have to negotiate different trade deals – now those may take a very long time. The Canadians demonstrated that with their trade deals. The Norwegians who people keep citing; they still have to adhere to the rules set by the EU. You can’t negate yourself from the rules if you want to deal with the EU countries.”

Also when it comes to migration, while yes, EU nationals can move freely within the member states, there are also 3 million British citizens whose jobs rely on being UK being a part of the EU.

“We want people coming to this country who can give the skills that the country needs. Now at the end of the day when you are trading with Europe and people want to come and work it will apply the same way as everyone else does and the entry will still be based on the skills that you bring. We have to also remember that we also have the advantage from the UK to be able to move freely around 27 other countries as well and three million of our jobs is dependent on us being a member of the EU. We cannot see this as a one sided debate, we also have to see the advantages we have. And the advantages we have is we are a member of a 500 million bloc and work freely in that bloc and get all the health benefits in that bloc too,” she explains.

What comes out of the conversation with Baroness Verma is that if anything, Britain only has things to gain from being a part of the EU.

Slamming EU-sceptics on Britain losing control and its power on a world stage, she said: “We are the 5th largest economy in the world, for the size we are of 60 million. In Europe – the Europeans themselves want us to stay because we are a very influential, vocal voice. When we have to negotiate at international levels, UK is seen at the forefront of making sure we have an influence on ourselves and others. So if I look at Aid and Development – we as a leading member of the EU we have huge influence on how are development spent is distributed globally in the developing nation. We are at the forefront of shaping how other donors are pledging. Our voice hasn’t diluted at all. What the EU has allowed us to do is actually demonstrate even today, what a strong voice we are. By being the 5th largest economy in the world actually demonstrates that.”

“We have not been told the facts because nobody knows what those facts are and I think I would rather stay within the EU and work and fight hard for my children’s generation, my children’s children’s generation because those are the people who benefit going forward from the free movement of people of finding jobs, where economies are growing. I would never want to encourage people to make a decision that they no idea what the outcome would be. And that’s the problem – we are jumping in to a deep well without knowing what at the bottom lies.”

(Mr Manish Tiwari is a London-based writer and the MD of Here & Now 365 Ltd, a leading multi-cultural advertising agency in Britain)