Incidents of racist attacks are reported to have increased after the Brexit vote, reports Asian Lite 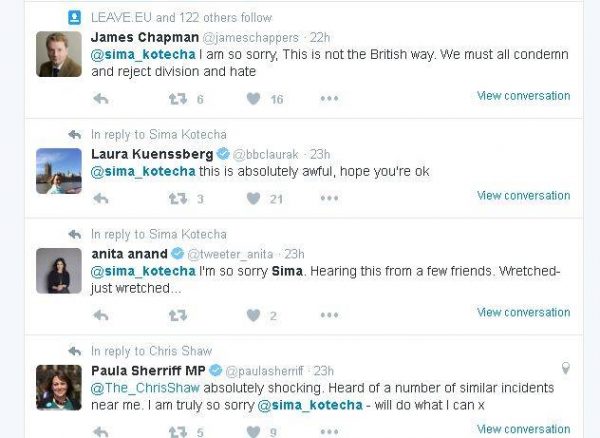 BBC reporter Sima Kotecha was left in `utter shock’, after a man in a pub called her `P***.’ Sima, BBC Radio 4 journalist, was speaking to Brexit voters in the Hampshire town in Basingstoke where she grew up, where 52% of people voted to leave the European Union.

In the recording aired by BBC today morning, she was heard asking a man in a local pub whether immigration was a factor in his choice to vote Leave. In a slur that was exchanged between them, the man was heard saying that he wanted `all immigrants’ to leave the UK but insisted he was not talking about `P****s’. The man was also heard insisting that he was `not racist in any shape or way’.

Her twitter post invited mixed responses with many supporters and fellow journalists offering their solidarity, while other dismissing the issue as non-existent.

“All the immigrants, they should leave the country, do you know what I mean?” he man told her.

“So are you talking about Eastern Europeans?” Kotecha asked.

“I’m not saying like P**is… I’m saying all of them,” the man replied, leading Kotecha to react with shock: “Did you just say P**is? That’s offensive.”

“Sorry love, I don’t mean… I didn’t mean to come across.. but it’s all them, like, they’re not foreigners – we all bleed the same and we’ve got the same heart – but it’s a different colour skin, you know what I mean,” the man said.

“So you don’t like Asians either?” Kotecha challenged him.

“I do like Asians, I’m not racist at all,” he said. “I know I used P**i but I could come out with [something] more offensive, you know what I mean?”

11% of people in Basingstoke are from a background other than White British. “Mono culture is now multicultural” Sima had said.

Sima apparently then spoke to a woman in the pub, who when told that she was being called P****, retorted, “Without meaning to sound rude, your skin colour’s different. Naive people will look at you at think you’re not English. And that’s the way people are around here.”

Following the referendum vote, a growing number of individuals and organisations have reported incidents of hate crime and on Monday senior political figures had condemned the abuse.

Racist attacks appear to have soared in Britain after the Brexit vote, as hate crimes reported to police have increased by 57%. Kotecha clarified that she has been told “this sort of talk” is nothing new in the area and not necessarily a consequence of the EU Referendum outcome.