Bhavan’s Shambhu Gupta strives to improve the arts centre and in the process art by his impassioned efforts, writes Rajitha Saleem.

Art and culture prospers not only by the work of artisans, but there are the efforts of numerous people behind the artistes who strive to bring them to the fore—encourage them, make arrangements for them, find venues for them to perform. These people need to be lauded as much as the artistes themselves as they contribute to the field of art as much as any artiste would. One such presence in the Indian cultural scene of Bharatiya Vidya Bhavan is Shambhu Gupta who has been an integral part of the institution for the last 40 years.

And deservingly so Bharatiya Vidya Bhavan honoured the Good Samaritan in Shambhu Gupta by awarding him with the title of `Karma Yogi’, `for his special and unique contribution to Bhavan.’ Shambhu Gupta’s association with Bhavan began way back in 1974, when the Bhavan was a small shop in the New Oxford Street. But his life changed completely when he met the legendary sitar artiste Pandit Ravi Shankar and urged him to take his wife Punita Gupta as his student.

The association with Pandit Ravi Shankar grew and Shambhu Gupta found himself arranging the concerts for the great artiste which found themselves coming back to Bhavans more and more.

“Ravisankar became close to our family and he asked me to look after Bhavans which he loved so much after his death,” Shambhu Gupta turns emotional.  And when Ravishankar passed away on 11 December 2012, Mr Gupta kept the word given to the great sitarist. On February 2013, Shambhu, and Punita met with the Executive Director of BVB Dr M.N. Nandakumar and expressed their interest to contribute towards the betterment of Bhavans.

Shambhu Gupta saw that the front garden of Bhavans was not really clean and decided to beautify the same. “I am used to doing many DIY things at my home. So I myself volunteered to do many things at making the Ravishankar memorial garden,” added Gupta. He personally supervised the making of arches, water fountain and the fences for the garden.

A petrochemical engineer by profession, Shambhu Gupta was a councillor of the London Borough of Ealing and both the experiences came in handy in beautifying Bhavan’s both front and back gardens. “I was well versed with the council’s measures in dealing with the land that was bordering with the neighbours and now we have a lovely garden with a fence in the back. The last three years I have been involved in all the infrastructure works in Bhavans and I can say that all these were done with very little cost to Bhavans,” said Shambhu Gupta. 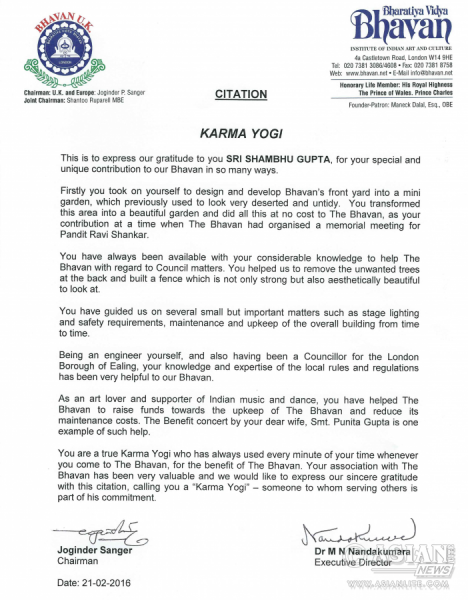 “I find the award given to me by Bhavans deeply satisfying as it aligns with my ideology in life that you should keep on doing your work without thinking of its results, which is exactly what `karmayogi’ is all about,” says a contended Shambhu Gupta. He also added that he was extremely happy that he received the award from the Swamiji at Sevashramam.

Shambhu Gupta informed that he has more plans for Bhavans such as making the windows completely dark in the main hall of Bhavans. “I am attracted to the spirit in Bhavans as it is the place where people who are genuinely interested in Indian music and dance come together irrespective of any race or religion,” said Shambhu Gupta.

Shambhu Gupta proclaims that Bhavans helps him give vent to the extra mental and physical energy he has after his retirement. He agrees that it keeps him young and away from all the ailments that are associated with old age.