Mumbai’s famous Wada Paav – street food will now be served on the street of Media City in Manchester.  Rahul Laud from Asian Lite visits this new street side venture and shares his experience

Bombay Dabbawala in a new avatar has hit the road in Manchester media city.  If the image of a Bombay’s Dabbawala wearing that white shirt, white cap and white pyjama carrying loads of dabbas (tiffin boxes) for delivery comes to your mind then you are mistaken. A brilliant new concept to sell Mumbai street food not in a restaurant but on the street itself is the brainchild of the globe trotter Sheetal Vinod Talwar of the internationally reputed Vistaar group.

Branded as Bombay Dabbawala with a unique logo of signboard of a railway station which one sees in Mumbai and on the London tube has caught the foodie’s eye in Media City. Just launched last week young professionals from BBC, ITV, and students from Salford University are queuing up to enjoy mouth-watering delicacies like wada paav (potato fritter in a bap), keema paav (mince), lamb and aloo (lamb with potato curry), chick peas curry, and the egg omelette paav. For those who enjoy kebabs there is seekh kabab in paav, a wholesome meal on the go served with a drink and curry with rice for a competitive price at 4.50£ per dish.

Like the Indian style ‘’dhaba’’- eatery on the road, this Bombay Dabbawala is a trailer that offers take away service and despite being street side eatery has the unique distinction of being hygienic , clean and neat that attracts a large customer .

To get a wada paav without the paraphernalia of fine dining is nostalgic to a mumbaikar like this writer who has grown up in the cities of India eating street food.

What’s more special to this trailer on the road is the fact that the chef and the person who serve are neither Indian.

They have managed to come as close as possible to Indian taste striking a unique balance to meet the taste and requirement of the local population. The meal is wholesome, nutritive and absolute value for money.

Talwar who has invested in popular jazz bars The Lazy Dog in Mumbai finds synergy in his cinema and food business. He says, “Like cinema I find food touches people. There is hope, joy and tremendous creative satisfaction as well.” Talwar finds restaurant is “much easier business and less risky.” He explains, “The whole logic of a trailer on the road is making service of food to people in their comfort zone. I take food to them wherever they are. It’s also making an extension and a broad base of Indian culture. Above all a trailer doesn’t limit me geographically I can set it up anywhere in the country. I identify and desire to relate to local cultures blending Indian culture through food.”

With this logic Talwar has the plan to set up 3 trailers in Manchester and later move to other populated cities like Leicester, Birmingham and also London.

“He confesses I am happy with smaller margins as profit in this business.” 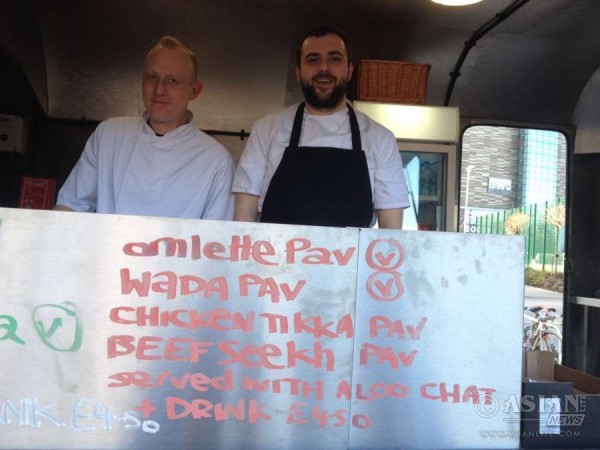 Echoing similar sentiment, Deepak Jain who runs the Bombay Dabbawala operation in media city, adds “the whole idea was crystallised when we were serving our cinema units on the sets. We thought of backward integration and Talwar who a great foodie is, thought why not serve our own food. Catering business here was thus born.” It’s reported that when Bhavna Talwar co-founder of Vistaar group and Sheetal’s wife who is a film director was shooting for her film Heidi in UK, the cast and crew that included Emila Fox, Bill Nigh and Mark Willaims, would prefer meals from the chef of Bombay Dabbwala – especially his prawn curry which is reported to be a delicacy.

Deepak concludes that there is a great demand emerging for delivery to offices in media city. With a plan to roll out at least 10 more after Manchester, he finds summer will be very good for the Bombay Dabbawala. Just started on February 15, Bombay Dabbawala like the Mumbai’s dabbawala has caught attention and is here to stay.