Prime Minister David Cameron hits campaign trail again. This time for his EU Referendum. The prime minister who won crucial deals on key issues is seeking support to win the poll on June 23. Following is an extract from his campaign speech at O2 headquarters in Slough:

Now, in 4 months’ time, we’re all going to have to make a very, very big decision: does Britain stay in a reformed European Union or do we vote to leave? Now, you make decisions at election times, and I would argue this is a much bigger decision, because at election times, you can vote in a team of people, and if you’re fed up with them after 5 years, you can vote them out. Obviously, I don’t like that bit, but you can do that.

This is a decision, though, that lasts for life. We make this decision, and it’s probably going to be the only time in our generation when we make this decision. And I was determined to make sure the British people had the very best possible decision. So what I’ve done for the last 9 months is to try and sort out some of the things that people are frustrated with, with the European Union. Because it’s not a perfect organisation; no organisation is perfect.

And I thought that the 4 things that most frustrated people about the European Union was that it’s been too bureaucratic and not competitive enough, so we got a proper set of actions to make sure we take burdens off business and create jobs and sign trade deals around the world. I’ve sensed – and I think many people have sensed – that it’s been too much of a political union, too much about the politics, and not about creating jobs and prosperity. So we’ve got Britain carved out of an ever closer union, so we don’t have to take part in those things anymore.

I’ve sensed – I think a lot of people have sensed – that it’s been too much of a single-currency club. The euro is tremendously important for those countries in it, but those countries out of it like Britain, we want to make sure we’re treated fairly inside the European Union, so we have fixed that to make sure we can never be discriminated against.

And the fourth thing I wanted to fix was to make sure that, of course we have free movement in Europe: you can live and work and travel and retire in different European countries. But we need to take some of the pressure off in terms of migration, and specifically, we need to have greater control over our own welfare system. So I’ve managed to secure the agreement that people who come to Britain and work, they’re going to have to come and work for 4 years before they get full access to our welfare systems. Now, I’m not saying I’ve solved all the problems that Britain’s got with Europe, or all Europe’s problems, but I think this is a good basis to now ask people, ‘Do you want to stay in this reformed Europe or do you want to leave?’

And I think when we come to this, the really big question, I think there are 3 very positive reasons for wanting to stay inside this reformed European Union. The first is, that I believe we’ll be better off, that we’ll create more jobs, we’ll create more livelihoods, we’ll see more investment, we’ll see more success for Britain. Why? Well, because we’re part, inside the European Union, of the biggest free-trade single market anywhere in the world: 500 million people, bigger than the US, bigger than China’s internal market. This is the wealthiest, strongest market in the world, and we have privileged access, without tariffs, the ability to trade and invest right across the EU.

And I think about it from O2’s point of view. Because we’ve got a set of rules about telecommunications and mobile phones and the rest of it, that’s been good for business because we’ve been able to break down barriers in other countries and set up businesses in other countries. That’s good for jobs, because we’re creating more jobs, including right here in Slough. But it’s also good for consumers, because this competition inside the single market has actually driven down prices and it’s cheaper now; much cheaper to use a mobile phone today than it was a decade ago. And also, with the end of roaming, it’s going to be – which we’re getting in 2017, it will be cheaper still when you travel.

So point one, I think we’ll be better off. Far better off inside the European Union. Three million jobs are dependent on our trade with Europe. Now, of course, not all the jobs would go if we left the European Union; we’d still do trade with Europe. But can we really put our hands on our hearts and say all those jobs would be safe, that we wouldn’t be disadvantaged if we were on the outside? I don’t believe we can, so we’re better off.

The second reason is, I believe that we’ll be safer inside the European Union. We obviously face, in our world today, some very big threats in terms of crime and terrorism, and obviously the primary thing we do there is we have a strong police force, we have security and intelligence services, we work with our longstanding partners like America to try and keep our people and keep our country safe. But I can tell you, as your Prime Minister, I’ve seen so many times how the border information we exchange with other European countries, how the criminal records information we exchange with other countries, this helps to keep us safe.

Let me just give you one example. We all remember those terrible days in 2005 when London was bombed by terrorists. The second time that was attempted, on 21st July, 1 of those bombers got out of the country, but because we were part of the European Arrest Warrant, we were able to get him arrested, get him back to the UK, and he’s now sitting doing a 40-year jail sentence. Before we had the European Arrest Warrant, before we had those arrangements, it could take years, sometimes as much as a decade, to get people extradited from other European countries back here, so we will be safer inside the reformed European Union.

I also believe we’ll be stronger. I believe profoundly that Britain is not the sort of country that simply looks inward on itself. We know that we should have a role in the world, because we will be stronger and safer and better off if we can actually get things done around our world. And as part of the European Union, just as being part of NATO or part of the United Nations, we can get things done. How did we get those oil sanctions against Iran, so they gave up their nuclear weapons? We did that inside the EU. How have we made sure we’ve had a strong response to Vladimir Putin and what he’s trying to do in the Ukraine? We’ve had sanctions set out inside the EU. How have we stopped our ships being attacked as they go round the coast of Africa and Somalia? We’ve done that through NATO, but also through the EU. So I believe we are stronger in the world if we are part of a reformed European Union. So stronger, safer, better off.

But I think we have to recognise in this decision you’re all going to take in 4 months’ time, that it is a choice. I’ve set out the positive choice of why I think we’re better off, stronger and safer, but we also need to ask ourselves, what would it look like outside the EU? And here I think we need some answers from the people making the other case, because right now, they’re not telling us what it’s going to be like outside the EU. I’ve looked at what the models are. You can have a situation like Norway. They sign up to all the rules of the EU, so they have to pay into the EU, they have to take migration from the EU, but they have no say on what the rules are. That seems to me a very, very poor deal. 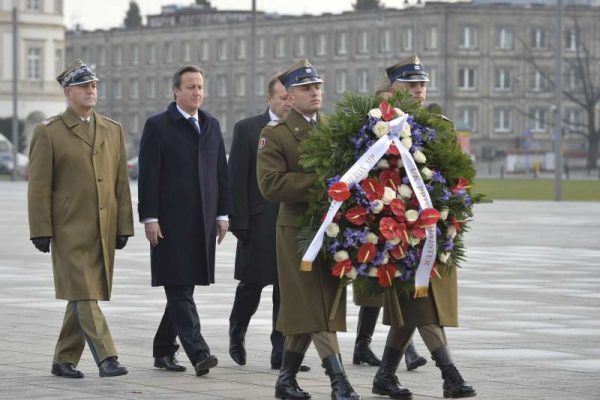 You could go to the other end of the spectrum, and say, as I think Mr Farage did yesterday, ‘Let’s just have the World Trade Organisation rules and be a member of the World Trade Organisation outside the EU, and see what that means.’ Well, what that would mean is, you’d start having to pay tariffs every time you export a car to Europe. Britain, for instance, is now the third largest manufacturer of cars in the EU: it employs 140,000 people. So I think we’ve got to look very carefully at these alternatives, because each one of them shares a key disadvantage, which is that basically, if you leave the EU, you no longer have any say over the rules, over the laws, over the way this market works, and we are, in the end, a trading nation where our businesses need access to that market and need a say over those rules.

When all is said and done, it’s not going to be me that makes the choice; it’s going to be all of you. This is a referendum where every single vote counts the same. But I just make 2 final pleas to you. First of all, I think what we can have now is the best of both worlds. Inside the bits of the EU that work for us, inside the single market, inside the political cooperation to get things done, inside those things that keep us safe against terrorists and criminals, but not in the single currency, not in the Schengen no-borders system, not in an ever-closer political union. We have the best of both worlds.

Final thing from me is that I feel very strongly about this. I feel that having spent 9 months trying to get us a better deal, securing that deal, and now with 4 months to go before this referendum, I feel with all I’ve seen in the last 6 years as your Prime Minister, the right decision is to stay in a reformed EU. I have no other agenda. I’m not standing as your Prime Minister at the next election. I’m simply going to speak for the next 4 months about the advantages I see of staying in and the dangers of coming out. But in the end it will be your choice, the British people’s choice. If you choose to stay in, we know what we get. If you choose to leave, I will put in place the arrangements as your Prime Minister that you asked me to do. But my strong advice, with all that I’ve seen and all that I know, is the right thing for Britain is to stay in a reformed Europe and to cast that vote on 23 June.