Mrs Manju Shahul Hameed, former Mayor of the London Borough of Croydon, handed over a cheque of £51,000 to two of her chosen charities – Age UK and Macmillan Cancer support. It was one of her mayoral responsibilities to raise money for the charities in her mayoral year.

Age UK exists in the community in supporting elders to tackle one of the major issues such as loneliness and Macmillan provides practical, medical and financial support and push for better cancer care and both the charities have a strong base in Croydon.

“I have chosen Age UK as I was a volunteer with them soon after I came to UK to join my husband.  Macmillan cancer support was chosen because I lost my mother and mother-in-law to cancer and I really appreciate Macmillan’s care in supporting not only the cancer sufferers, but their family and friends,” said Manju.

The fundraising events that were organized during her tenure as Mayor included:

Most of the events were sponsored by local businesses, such as AIG, Interserve, Parkview Nursing Home, Day Lewis Pharmacy, Tesco, Croydon Partnership, AA Homes and Housing and Hilton. 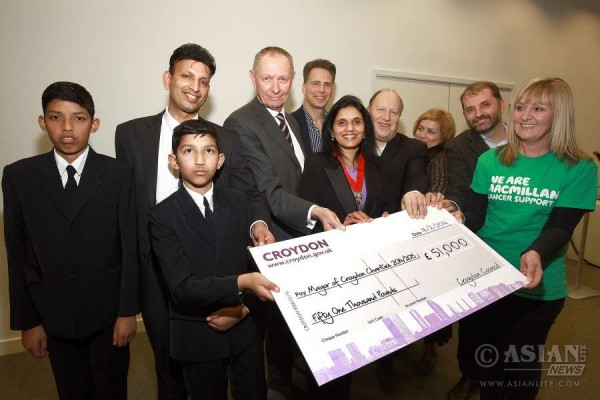 The amount was handed over at a function held at Community space, Bernard Weatherill House,
Croydon and would be equally divided between the two charities and will be spent on Croydon residents.

The event was attended by leader of the council, Cllr Tony Newman, Deputy leaders Cllr Alison Butler and cllr Stuart Collins and Cllr Mark Watson, the cabinet member for Communities Cabinet Member for Communities, Safety and Justice, in addition to prominent personalities from the community.