I want to live in a city, and see my daughters grow up in a city in which everyone gets a fair shot at life and the opportunity to succeed in the economy of tomorrow….writes Sadiq Khan, Labour’s candidate for London Mayor

“I grew up, in South London, the son of a bus driver. But I make no apologies because while some of you cynics may mistakenly think this is some kind of base political strategy to differentiate myself from my Conservative opponent, my experience of our city provides the foundation of my ambitions for it.

A modest household income was a surmountable obstacle, not a barrier, to my parents’ dream of buying their own home.  And with the support of a strong family, a good education, a secure home, I was able to aspire to a well-paid career and a higher standard of living. Today the experience of the bus driver, the retail assistant, the waiter or waitress is very different. And for their children, the opportunity to share in London’s prosperity is barely perceptible.

Even the trainee accountant, programmer or, as I once was, solicitor can’t be confident of a high standard of living.

I want to live in a city, and see my daughters grow up in a city in which everyone gets a fair shot at life and the opportunity to succeed in the economy of tomorrow.

The return to pay growth in most parts of Britain, after a period of squeeze worse than anyone expected, has not reached ordinary working Londoners.

The new National Living Wage may help to close the gap on in-work poverty – but with the new mandatory rate only benefiting over 25s, and falling well short of the real London Living Wage, at best it’s going to bring more low-paid workers closer to the threshold.

To make a real difference to low pay and in-work poverty in London, we need to retain focus on reducing the number of Londoners paid below the London Living Wage.

Currently, that’s up to 700,000 Londoners. And the number of low paid jobs is increasing – particularly among full time men.

In the absence of any will on the part of Government to address the particular problems that London faces, encouraging more employers to pay a London Living Wage remains the strongest mechanism we have for challenging poverty pay, particularly in the hospitality and retail industries in which it is most prevalent.

My aim as Mayor will be to make London the world’s first ‘Living Wage City’, in which paying everyone who works enough to afford them a decent standard of living is a badge of pride for the business community. I’ll work towards that goal through partnering with employers, using carrots not sticks.

While I’m on the subject I want to welcome the new Living Wage Commission and congratulate Gavin Kelly on his new role.

The work it does in identifying a more consistent, fair formula will be important. In particular, and of principal importance for Londoners, will be the inclusion of a real reflection of the cost of housing and the extent of its impact on in work poverty, and I hope that’s something that features strongly in the Commission’s work.

But low pay is only one part of the living standards challenge that faces London. In-work poverty, and falling living standards for middle earners, are both being driven harder by rapidly rising living costs than the squeeze on pay growth.

And that’s before you consider the impact of the costs of childcare, and transport.

So alongside making London a Living Wage City, my drive towards a fairer economy will be built around action to tackle London’s housing crisis, to reduce the cost of transport, and to better support Londoners’ need for childcare.

Ultimately, the cornerstone of higher pay and living standards across the board is increased productivity, in a high-skill, sustainable and resilient city economy.

In London, that won’t be achieved by a Mayor who doesn’t get how to work with business.

A successful approach to creating inclusive prosperity must be rooted in partnership between the Mayor, business and civil society.

The best Mayors from around the world are active Mayors. They show that by using their influence locally, nationally and internationally, not least as a lever for partnerships, city leadership is as much about how you use the influence and status of the office as which policy levers you pull. 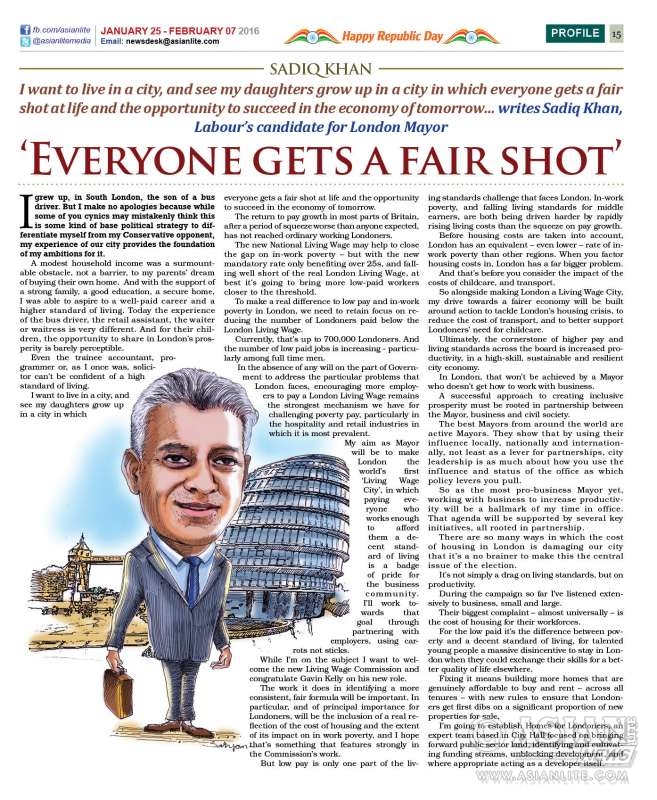 So as the most pro-business Mayor yet, working with business to increase productivity will be a hallmark of my time in office. That agenda will be supported by several key initiatives, all rooted in partnership.

There are so many ways in which the cost of housing in London is damaging our city that it’s a no brainer to make this the central issue of the election.

It’s not simply a drag on living standards, but on productivity.

During the campaign so far I’ve listened extensively to business, small and large.

Their biggest complaint – almost universally – is the cost of housing for their workforces.

For the low paid it’s the difference between poverty and a decent standard of living, for talented young people a massive disincentive to stay in London when they could exchange their skills for a better quality of life elsewhere.

Fixing it means building more homes that are genuinely affordable to buy and rent – across all tenures – with new rules to ensure that Londoners get first dibs on a significant proportion of new properties for sale.

I’m going to establish Homes for Londoners, an expert team based in City Hall focused on bringing forward public sector land, identifying and cultivating funding streams, unblocking development, and where appropriate acting as a developer itself.