Kaliph Anaz looks in to the political climate at Westminster Village for Asian Lite News….@asianlitemedia

Turning and turning in the widening gyre

The falcon cannot hear the falconer;

Mere anarchy is loosed upon the world,

The blood-dimmed tide is loosed, and everywhere

The ceremony of innocence is drowned;

The best lack all conviction, while the worst

Are full of passionate intensity……TS Eliot, The Second Coming 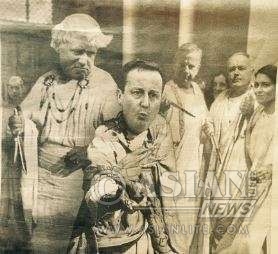 April is still few weeks away. It will be the “cruelest month.” The political temperature at Westminster village has already reached the double digit. The nation is divided as well the political parties. In and out of EU…That’s the question!

Back to Eliot. Falcon is not hearing the Falconer….True…. Best friends are now foes. Heir apparents are turning their back on mentors. Prodigies are issuing statements against their masters. What a Mess. EU has divided us all. But in the case of Labour, it’s Trident! Even punters are poking fun on the game politicians play at Westminster. See the advert of Paddypower. Poor Cameron! BoJO, Gove, IDS besides Priti with blood dripping daggers! In the back drop a grinning Nigel Farage. Et Tu, Boris? 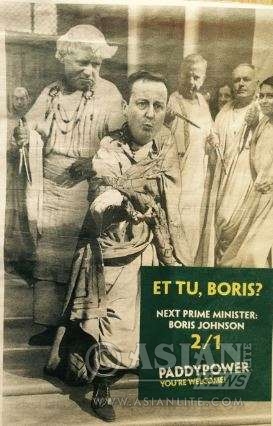 The rising star of British Asian politics, the quite influential Priti Patel is no in the Brexit camp. She is endorsing statements from the Leave EU camp suggesting EU is the worst thing for the British Asians.

“British business, including those businesses set-up and established by members of the diaspora living in the UK, are eager to access the Indian market and build mutually beneficial trade deals with businesses in India,” Priti said in the statement.

“ Those new workers are also global consumers and the UK can provide more of the goods and services they want if it was outside of the EU. Although the focus of the Conservative Government on enhancing our relationship with India has led to an increase in trade since 2010, we could go further if we were not held back by the vested self-interests of the EU. Indeed, one of the reasons why our trading links with India were inadequate when we came to Government in 2010 was because of the focus that Britain had given to trade within Europe as a result of membership of the EU.

Priti accompanied Cameron to several temples and Asian centre to woo the Asian votes during the 2015. Her alignment with the No Camp is seem to be political move to join with a new powerful lobby which will call shots in the decision of next Tory leader and cabinet formation. Let’s wait and see.

But the other star in the government, Business Secretary Sajid Javid got a different opinion.

Mr Javid said the EU membership is good for the business climate.

“The EU has preferential trade deals in place with 53 countries and territories around the world. These complex agreements have been built up over the course of nearly half a century, and nobody can say how many years will pass while they are unpicked and rewoven for a post-Brexit Britain,” Sajid wrote in the Mail.” I worked in international business long enough to know that uncertainty is the single biggest enemy of growth.”

“For me, this referendum does not have to be a once-in-a-generation event. The fight for reform is not over and if Brussels fails to recognise that, I can see a time when walking away may be the right thing to do – but in a more benign global economic environment and under a UK Government that makes a credible case for leaving.

For now, we stay, and we fight. So when I go to cast my vote in June, I’ll only be thinking about one thing – what is right for my country and for my family. And whether it means agreeing with me or not, I’d urge you to do the same.

Wait and see. Who will win this fight? We are waiting for the reactions from other giants like Alok Sharma, Shailesh Vara, Dr Rrami Ranger, Baroness Verma.