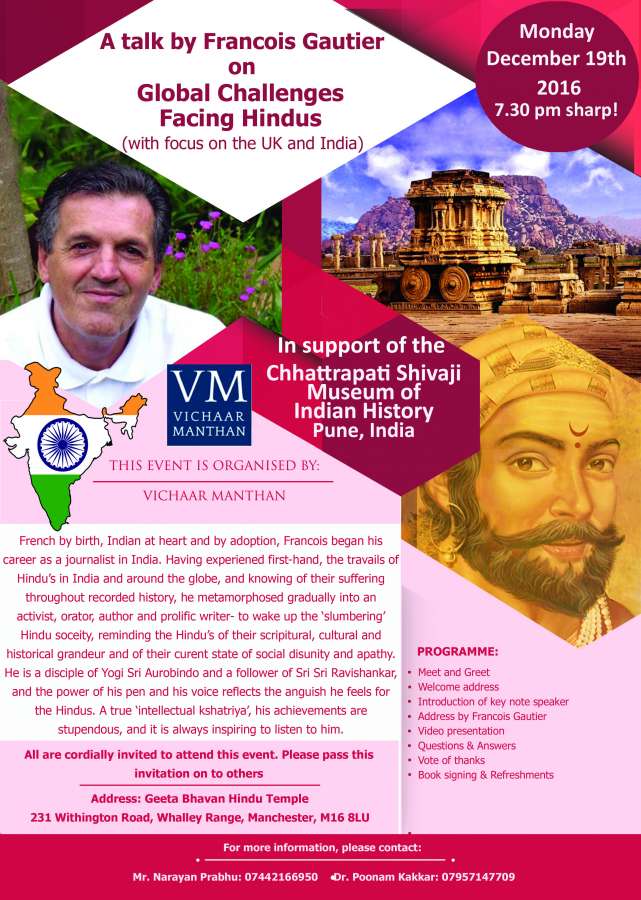 Mr Gautier, renowned political journalist, author, speaker and  scholar on Indian history, has made India his home for the past 45 years. He will talk on Global Challenges Facing Hindus (with focus on the UK and India)  at an event organised by Vichar Manthan on Monday 19 December 2016, 7.30 pm in Geeta Bhavan Hindu Temple, Manchester.

The event is open to all and free. The programme includes networking, Video presentation, Questions and answers, Book signing followed by refreshments.

On Dec. 15, at North Harrow in London Gautier will address the guests of Sardar Patel Memorial Foundation . This will be followed by a talk on Sunday December 18 at Leicester by the Bharat Welfare trust .  Talks at London and Leceister are  by invitation only. His talk will also include presentation on ‘Shivaji Maharaj Museum of Indian history ‘ which is located in Pune. At the museum, Gautier has built seven invaluable exhibition halls to depict Indian history.

Gautier is an authority on Indian history and has made several contributions to various Indian and international publications and books. His book Guru of Joy based on his experiences with the internationally renowned peace ambassador Sri Sri Ravi Shankar has won him global acclaim.

French by birth, Indian at heart and by adoption, François began his career as an journalist in India. Having experienced, first-hand, the travails of Hindus in India and around the globe, and come to know of their sufferings throughout recorded history, he metamorphosed gradually into an activist, orator, author, and prolific writer – to wake up the ‘slumbering’ Hindu society, reminding the Hindu’s of their scriptural, cultural and historical grandeur and of their current state of social disunity and apathy.

He is a disciple of Yogi Sri Aurobindo and a follower of Sri Sri Ravi Shankar and the power of his pen and his voice reflects the anguish he feels for the Hindus. A true ‘intellectual’ his achievements are stupendous, and it is always inspiring to listen to him.

Asian News from UK
Leading Newspaper for Politics, Business & Economy
Leicester
We use cookies on our website to give you the most relevant experience by remembering your preferences and repeat visits. By clicking “ACCEPT ALL”, you consent to the use of ALL the cookies. However, you may visit "Cookie Settings" to provide a controlled consent.
Cookie SettingsREJECT ALLACCEPT ALL
Manage consent