As temperatures soar in the heatwave that has struck UK, nation’s elderly are asked to take extra care, reports Asian Lite News 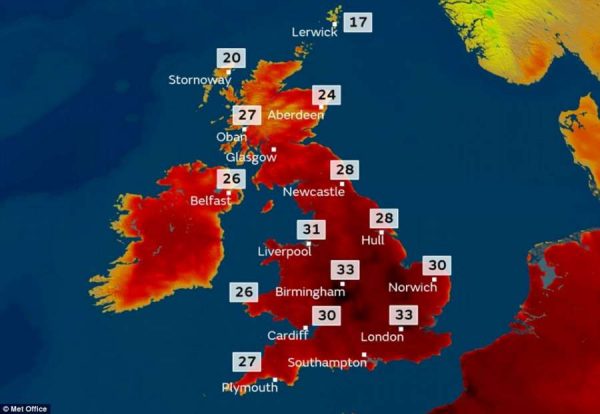 Hot air coming from the Sahara desert will cause temperatures to rocket to 93.2F (34C) and put vulnerable people at risk, according to experts.

The Met Office is expected to issue an official statement today warning older people of the dangers.

Separately, Public Health England is expected to declare a level 2 heat-health alert, triggered when the Met Office forecasts a 60 per cent or  greater chance of temperatures hitting 30C for at least two days consecutively.

Officials are trying to prevent a repeat of 2003, when 2,000 more deaths than usual were recorded in two weeks in August, as temperatures rose above 86F. The Met Office has said that Sunday was the hottest day of the year at 82F, but that new highs were likely on Monday and Tuesday.

The heatwave follows a duller and colder June than usual. The West Midlands and the South East are expected to be the warmest areas of the UK.

However, by Wednesday the weather will settle and thundery showers will bring an abrupt end to the heatwave, with “fresher” conditions likely towards the weekend. The charity, Age UK, advised older people to stay indoors and to eat more cold foods, mainly salads and fruits, to keep hydrated in the heat.

An Age UK spokesman was reported to have said, “The importance of staying cool and keeping well in hot weather cannot be overestimated, as older people can be particularly susceptible to heat-related illness. Heat stroke is a life-threatening condition and can develop if heat exhaustion is left untreated.”