Prime Minister David Cameron reiterates his commitment to keep the country on EU by challenging the Euroskeptics on key issues of trade and jobs….writes Asian Lite News

In an article for the Telegraph, the prime minister demands cabinet rebels, which includes Indian diaspora champion Priti Patel MP, answer key questions over the future for Britain outside the European Union.

“If you vote to remain in Europe, I can clearly describe what you’re voting for,” the prime minister said in the article. “Our trade links with a reformed Europe and the wider world will grow; we’ll keep on working with our neighbours to make our country safer; and Britain will continue to help set the rules of the market of 500 million people on our doorstep, and have a say over the future of the continent to which we are geographically tied. That’s the picture of “in” – positive and definitive.

The senior Tory leader said said those arguing to stay in the EU were pessimists acting as if the UK was “too inconsequential” to cope outside. He was answering qurstions on EU in Andrew Marr show.

“Leaving the EU would be a “stride into the light”, enabling the UK to trade freely and control migration,” he said. 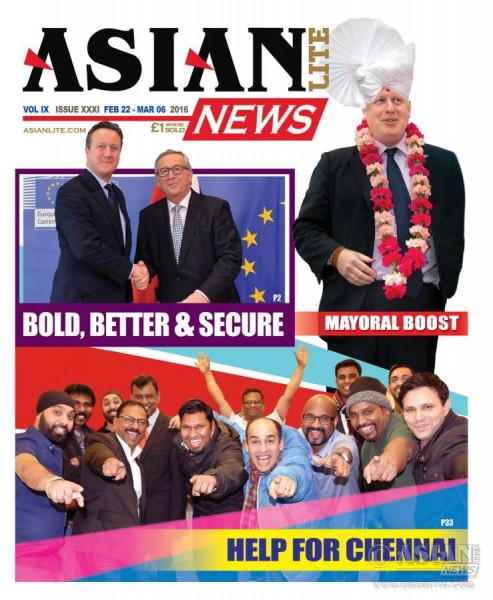 David Cameron has warned an EU exit would be a “leap in the dark”. A referendum on whether the UK should remain in the EU or leave will be held on 23 June.

Cameron in the Telegraph article said it’s simply not good enough to assert everything will be all right when jobs and our country’s future are at stake. That’s why today I want to set out some of the specific questions those who would leave the European Union must answer. They don’t owe it to me; they owe it to us all, because at the moment what they are offering is a leap in the dark.

“The first question is: what trading relationship would Britain have with Europe after leaving? Every country that’s been granted full access to the Single Market has had to pay into the EU, and accept free movement of people – but has no say over rules that govern those things.

“Just ask Norway; they pay roughly the same per head to the EU as Britain does, and they accept twice as many EU migrants, yet they have no say at the EU Council.

Another suggestion is to negotiate a Free Trade Agreement or similar with the EU, like Canada, Switzerland or Turkey. But none of these countries has an agreement that is any way as comprehensive as the Single Market. That’s OK for them – around a tenth of Canada’s exports, for example, go to Europe; but around half of ours do. What’s more, Canada’s agreement, when it takes effect, will offer less access for services than we have now. But that sector makes up three-quarters of our economy. What would that mean for UK jobs in retail, insurance and creative industries?

“A final option is to fall back onto the World Trade Organisation for trade. But this could be crippling for our industries, as we’d have to accept tariffs that are sometimes as high as 50 per cent.