The University of Leicester will confer the Honorary Degree of Doctor of Laws upon Muhammad Shahid Raza, Chief Imam at Leicester Central Mosque, on Thursday (21st January)…..reports Asian Lite News 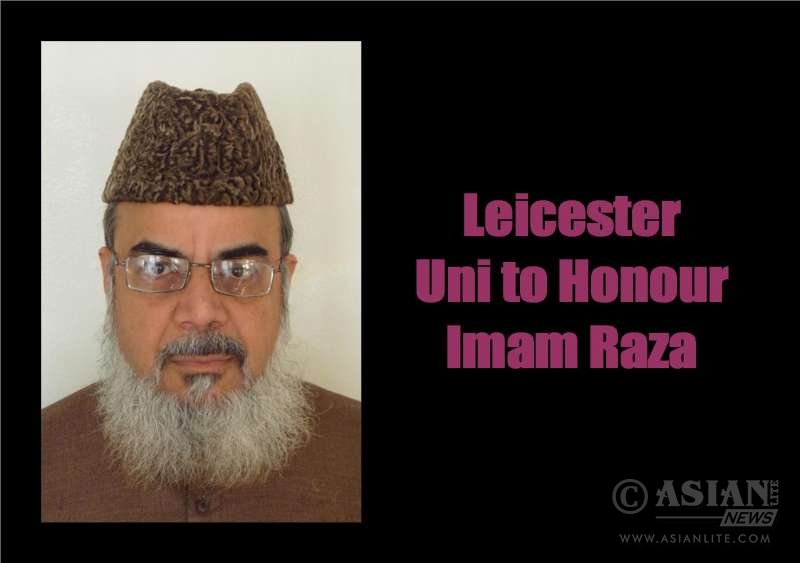 Imam Raza will be awarded his honorary degree by University Chancellor Lord Grocott at the University’s degree ceremony at De Montfort Hall before an international audience of graduating students and their families.
Mr Raza, a leading Muslim cleric in the country and a teacher,  has spent his life working with Muslim community groups and on intra-faith dialogue locally, nationally and internationally. He will be conferred a Doctor of Laws degree at 3pm onThursday 21 January.

Mr Raza said: “The city of Leicester has always been a place of significance in my life since I emigrated here from India in the late 70s. One of my first responsibilities as Imam of Leicester Mosque and then Leicester Central Mosque was to oversee the moral and spiritual education of children. In addition to this I have always strived to instil in my students a desire to achieve academically and integrate themselves as valuable members and contributors to society. I am delighted to note that many of my former students have gone on to graduate from this university and of those many are now working in this city as civil servants, teachers and doctors or owners of small businesses. For this reason I reflect on this award fondly and I hope it will further inspire the young Muslims of Leicester.”

Muhammad Shahid Raza serves as Head Imam at Leicester Central Mosque and is a leading Muslim cleric and teacher. He was born and educated in Eastern India, and received his higher Islamic training there.

In 1978 he was invited by the Islamic Centre in Leicester to serve as its Head Imam. In Leicester he has established a tradition of inter-faith dialogue by welcoming to the Centre many groups and individuals from different faith communities. He has also actively participated in the formation of the Federation of Mosques in the city, one of the first organisations in the UK to facilitate intra-faith dialogue within the Muslim community.

From 1978 to 1984 he served as Head Teacher at the Islamic Centre evening school, and used this opportunity to impart moral and Islamic education to young people. He still serves in the capacity of Head Imam and leads the Friday prayer at the Leicester Central Mosque. In 1984, he moved to London to live, and joined The Muslim College, at the time a pioneering institution in Western Europe for the training of Imams and community leaders. Here he designed and conducted the very first in-service training course for Imams.

He is currently Executive Secretary and Registrar of The Muslim Law (Sharia) Council UK and is engaged in a number of initiatives directed towards the wider community in Britain, Europe and North America through his association with organisations such as the InterFaith Network UK and the InterFaith Youth Trust, London. In the 2008 New Year’s Honours he was awarded the OBE for services to the Muslim community in Leicester.