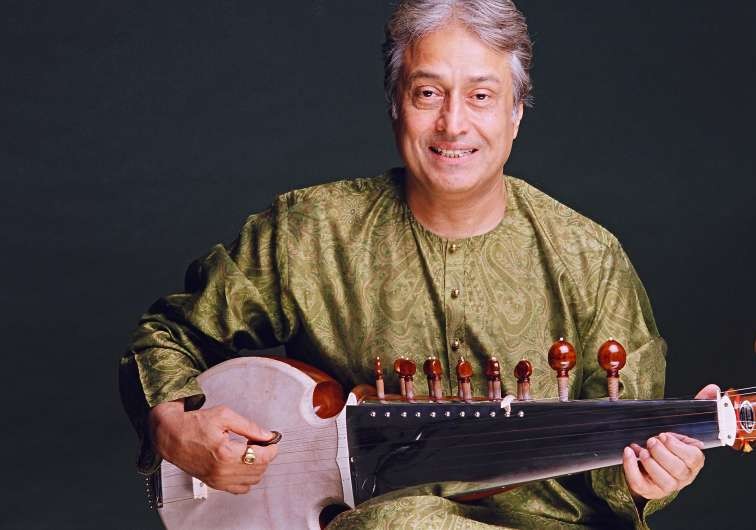 Southbank Centre in London will witness the largest gathering of India’s great classical masters in London at the Darbar Festival through a range of high profile concerts at the Royal Festival Hall over the weekend of Friday 16th-Sunday 18th September. Acclaimed as the finest Indian classical music festival outside of India, headline performances include the master of sarod the legendary Ustad Amjad Ali Khan, the maverick and sitar innovator Niladri Kumar and south India’s acclaimed vocalist Aruna Sairam.

Darbar launches this year’s Festival with ‘Universal Notes’ which brings together two great classical traditions – Western and Indian classical music – in a groundbreaking collaboration between today’s most imaginative and skilled musicians.

This premiere performance marks the culmination of a year long project between Darbar and Philharmonia Orchestra, which deliberately moves away from simply jamming or creating a ‘fusion’ music piece.

Universal Notes is inspired by the Indian raga, which through intensive workshops in both India and the UK, has brought together the talents of these extraordinary musicians to create a work of depth and beauty that will doubtless enchant and impress.The collaboration brings members of the orchestra, namely Matthew Barley (cello & Artistic Director) and two of the great Indian masters together- Niladri Kumar (sitar) and Rakesh Chaurasia (bansuri) together.

Ustad Amjad Ali Khan-the master of the sarod (an instrument evolved from the rabaab which was brought to India hundreds of years ago by Persian horsemen) appears with the Kings of Tabla: Pandit Kumar Bose and Pandit Anindo Chatterjee; two of the highest-acclaimed Indian musicians in the world playing together in the UK for the first time. Saturday’s Double Bill features vocal performances from the magnificent Aruna Sairam, her haunting and intense voice accompanied by the masterful playing of Jayanthi Kumaresh. By replacing the violin with Kumaresh’s saraswati veena the performance returns to the authentic original Carnatic music before the period of British rule in India.

Audiences can also catch Aruna Sairam in conversation with fellow musicians, Shubha Mudgal and Jayanthi Kumaresh as they discuss Indian Women in Music. Shubha Mudgal will perform in Sunday’s double bill, along with Ustad Amjad Ali Khan. These two musical legends showing off their prowess in vocals and sarod respectively. Morning concerts will be held in the stunning fifth floor performance room, where the London Eye appears majestically beyond the window in front of which these mesmerising musicians play. Roopa Panesar with Pandit Anindo Chatterjee, and the UK premier of rising star, Vishal Jain, accompanied by Surdarshan Chana on the jori.

A regular fixture at Southbank Centre, Darbar Festival has significantly been programmed as part of the Southbank classical music programme. The word ‘Darbar’ refers to the audience chamber in a maharaja’s court and festival-goers and newcomers to the festival will be able to learn about the vibrant contemporary Indian classical music, immerse themselves in over 30 hours of high quality music and explore the many traditions, schools and styles of the classic artform.Featuring over 30 of the world’s top Indian classical musicians, it is the only festival in the world to regularly unite artists from both Hindustani (north India), Carnatic (south India), Dhrupad (India’s most evolved art form) and percussion traditions.

Founded in 2006, Darbar Festival was a tribute to Bhai Gurmit Singh Ji Virdee, a revolutionary tabla teacher, for his long and selfless contribution to the UK music scene. His son Sandeep Virdee became the founder and Artistic Director of the festival, eventually giving up a career in accountancy to devote his time in bringing Indian classical music to a wider audience, he says:

“Now that the Darbar Festival is part of UK’s cultural diary it gives audiences a chance to fully immerse themselves into India’s greatest art form right here in London, something that they would only achieve if they travelled to three major cities in India.”

Whether you are an Indian classical music expert or simply wanting to learn more, Darbar Festival welcomes everyone to come and enjoy one of the world’s great classical artforms. With free family events, an Indian Music course, Yogabliss classes, the Darbar Pop Up Record Store, Southbank Centre offers its visitors a taste of the Indian cultural experience.