DON’t WASTE YOUR VOTE… Every Vote Counts …Despite an intensive negative campaign and the media onslaught on him, Labour candidate Sadiq Khan is leading in the London campaign…an exclusive Opinium poll for the Evening Standard revealed

Labour candidate has a nine-point lead over Zac Goldsmith in the battle for Mayor of London.

Londoners are going to poll tomorrow and the political pundit are saying a low turn out will change the scenario.

Mr Khan is on 35 per cent of first preference votes, which is unchanged since the last Opinium survey in early April. Mr Goldsmith is down a point to 26 per cent.

On crime, the rivals were closer at 24-21, while on public transport fares, Mr Khan was more trusted by 32-18. There was just a point between the pair on the environment and air quality, with a 23-22 split.

Mr Goldsmith was ahead 31-21 for attracting business and investment to London and on airport expansion by 22-19.

Another survey – by YouGov for the Evening Standard earlier revealed Sadiq Khan has taken a wide lead over Conservative rival. With Boris Johnson out of the picture Labour is building on its core vote in London, increasing its 9 point lead in the 2015 general election to 16 points, aided by national Conservative unpopularity and a slight boost for Jeremy Corbyn’s team.

Under a new weighting scheme taking into consideration likelihood to vote, and excluding don’t knows, Sadiq Khan (48%) has a 16 point lead over Zac Goldsmith (32%). As with the election itself, when neither candidate wins 50% in the first round second preferences are reallocated – giving Mr Khan a 20 point lead over Mr Goldsmith. 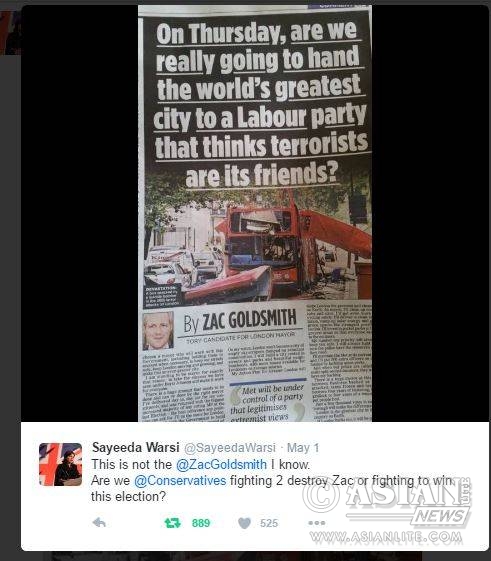 Putting the don’t knows back in and setting aside likelihood to vote – to make the results comparable with our last two polls – Sadiq remains on 31% while Zac falls from 25% to 20%.

The Tory candidate has been criticised in recent months for adopting a negative campaign, sending out leaflets calling Mr Khan ‘radical and divisive’ and claiming the Indian community’s family jewellery would be at risk under Labour.

The strategy seems to have backfired, as Londoners are more likely to call Zac Goldsmith divisive (18%) than Sadiq Khan (13%). Baroness Sayeeda Warsi tweeted a picture ridiculing the Tory campaign.

The social media is celebrating a video about the Tory candidate’s car crash interview at an Asian Awards function. Even though Mr Goldsmith is a fan of Bollywood, he couldn’t name a single favourite actor!