Mr Chandra Babu Naidu is a visionary leader from south Indian state of Andhra Pradesh. The highly qualified chief minister even impressed former US President Bill Clinton and Microsoft’s Bill Gates with his meticulous planning and visions for progress for the southern state….writes Dr Sekhar Vemuri. Telugu Communities in the United Kingdom are warmly welcoming our beloved Chief Minister 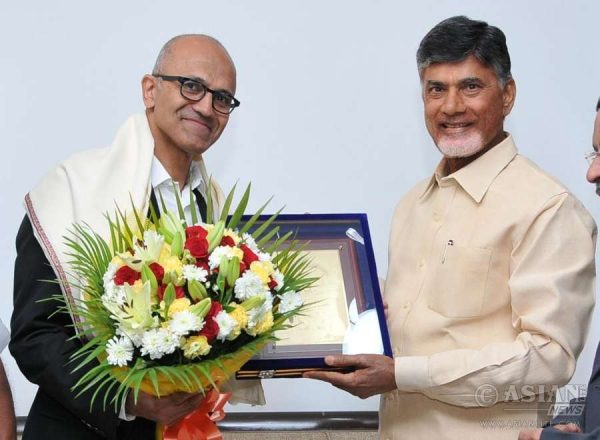 Mr Naidu, an economics post-graduate,  is seen as a  good administrator for the new and old generation in Andhra Pradesh. In the 90s,  he was the chief minister of the undivided Andhra Pradesh and made good progress in terms of self-sustainability in government sectors especially in power and information technology.

Mr Naidu is using  all  the central government projects with modifications for the benefit of the state and trying to make the new Andhra Pradesh as a role model for others emulate.

Mr Naidu is following Indian Prime Minister Narendra Modi in acquiring knowledge and technology from abroad. He is  visiting Davos every year and always making good impression among trade circles.

Amaravati is the proposed riverfront capital city. It is located on the southern banks of the River Krishna in Guntur and Krishna districts.  The new city will cover an area of 217.23 sq. km., within the Andhra Pradesh Capital Region.

The foundation stone of the planned city was laid at Uddandarayunipalem village of Guntur district by Modi on 22 October 2015. The cities of Guntur and Vijayawada are the major suburbs of the city.

Mr Naidu attended several meetings in the UK earlier, but this is his first visit to UK as chief minister. He was invited by British High Commissioner to attend the CII meeting in London on March 11.

Mr Naidu  was instrumental in bringing reforms in the administration by introducing e-governance. Nobody can argue in India about his role in introducing e- technology in Andhra Pradesh developing Hyderabad as IT hub in the world map.

In the year 1994 when PV NarasimhaRrao came to power to rule the country he was instrumental bringing many reforms and at the state level Mr Naidu was  the first person who implemented all the reforms introduced by the centre at that that time successfully.

We have to remember Sri NT Rama Rao. He was  the first chief minister  who abolished the Patel Patwari system , the Karanam system in Andhra Pradesh. All sectors of people benefited from this monumental change. Mr Naidu encouraged all sectors of people, back ward classes and farmers to access. He established highest number of computer science courses in the state. At one point of time even he was criticised for encouraging farmers children get education in the computers. Because of his policies, many Telugus settled abroad as soft ware engineers. Now most of the rural people (up to 70%) people living in the villages have their second generation living abroad and their  life style has changed completely for better.

Mr Naidu introduced Janmabhoomi programme and involved NRI and local communities to participate in the Jai Janmabhommi programmes. Mr Modi followed Mr Naidu’s formula in the Gujarat State during his term as a chief minister and became successful bringing many NRI funds for the development of state.

Mr  Modi made Mr Chandra Babu as a chairman to Niti Ayog by which he is coordination the activities of states participation in Swatcha Bharat.

Mr Modi introduced smart city programme and Mr Naidu  went further one step ahead of him  brought one simple programme called “ Smart Village/ Smart Ward by including 20 point formula. In this formula all needs of the community  including sanitation, education and health are introduced. He is involved  all  sections pf people, non government organisations, celebrities, bureaucrats and  his party people and they became partners or adopting villages. He removed the impression  that who adopts the village/ ward need to put crores of rupees from their pockets especillay in the minds of NRI people. He made very simple partnership of funds from both sides  i.e from the government and partner and work for the community.

Mr Naidu always works ahead of others. Under his leadership Andhra Pradesh is the first state used centre’s power supply schemes and by which within 2 to 3 months after the new state was formed power cuts were stopped. The state power board started supplying 24 hr power supply.  Many of the people were unaware of it even surplus power is helping to a great extent and helping the needs of neighbour Telugu state Telangana.

Andhra Pradesh government recently introduced online vehicle registration in the show room itself to the customer.

In the national fibre optic project plan Mr Naidu who is popular called “Tech –savy aims to connect 12 million house holds  at 15 Mbps broad band service at 150 Rs/month by the end of December 2016.