Kadiza Sultana, 17, is thought to have died earlier this year after her home in Raqqawas hit by a bomb believed to have been dropped by a Russian plane, ITV reported 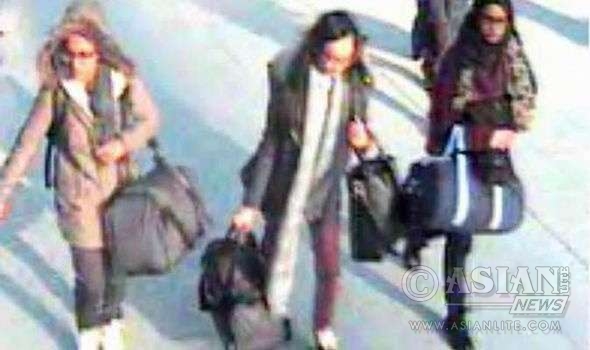 One of the Jihadi brides from London who fled the UK to join ISIS in Syria has been killed by an airstrike in Raqqa.  ITV News revealed that Kadiza, who was one of three Bethnal Green schoolgirls who left their homes to join so-called Islamic State, is dead.

Her sister Halima Khanom said: ‘We were expecting this, in a way. But at least we know she is in a better place.’

The schoolgirl had been living in Syria after leaving her home in East London during the Easter 2015 school holidays to join Islamic State.

She travelled with friends Amira Base and Shamima Begum, who were both just 15 when they fled and are believed to still be in Raqqa. All three had attended Bethnal Green Academy in Tower Hamlets.

It is believed that all three wed fellow foreigners who were fighting for the Islamic State. Khadiza’s husband was an American national of Somali origin who died late last year.

The trio shocked the nation after leaving their A-Level courses and their families to marry ISIS fighters in Syria. Following Kadiza’s death it has emerged she had become disillusioned with life in Syria and was planning to flee the ISIS-stronghold to return to Britain.

he Bethnal Green schoolgirls were among more than 800 Britons believed to have left the UK to join IS or other militant groups in Syria and Iraq.

It is thought that around 400 may have since returned. Some have faced prosecution on arrival in Britain, with others allowed to re-enter society under the watch of security services.

Last year, Metropolitan Police Commissioner Sir Bernard Hogan Howe told MPs the Bethnal Green trio would be unlikely to be prosecuted if they returned to Britain, unless there was evidence they had committed any specific crimes while with IS.