The London School of Economics and Political Science’s Student Union will host its prestigious annual conference ‘India Forum 2016’ this weekend in London. This year’s theme is: ‘India’s Growing Global Footprint’, and will shine a spotlight on the pertinent topics affecting India in relation to its place on the global stage, particularly with reference to its recent listing as ‘the world’s fastest growing economy’. 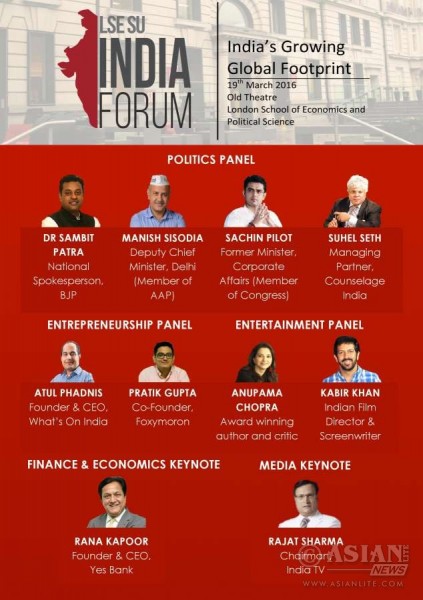 The event is being inaugurated by Virendra Sharma, Member of Parliament for Ealing and Southall. The conference will be structured into five thought-provoking panels, incorporating the following: Politics, Entrepreneurship, Finance Keynote speech, Media and Politics Keynote speech, and Entertainment. The topics will include:

The Finance keynote address will be given by Rana Kapoor, MD & CEO of Yes Bank, who will discuss ‘India’s Resurgence as a Design, Innovation, Creativity led Entrepreneurship (DICE) Economy’. The Media Keynote speech will be delivered by renowned journalist and Editor-in-Chief of India TV Rajat Sharma, who will talk about ‘how can the media balance its role as a political watchdog and a source of entertainment?’ The conference will close with an ‘In Conversation’ session led by acclaimed author, journalist and film critic Anupama Chopra alongside acclaimed film director Kabir Khan who will discuss the issue of ‘Bollywood’s Soft Power’ in popularising India’s film industry to a global audience.

Speaking about the event, Sanam Arora, President, National Indian Students and Alumni Union UK, said: “At the National Indian Students and Alumni Union UK we aim to develop future leaders for India, the UK and the Indo-British relationship. Through this forum we hope to bring together the young Indian community in Britain with change-makers and inspirational personalities that can enable knowledge transfer and motivate diaspora Indian youth to take a more active role in the India growth story.”

Ayush Rawat, President LSE India Forum 2016 and Head of Business Development at National Indian Students and Alumni UK, said: “With India being labelled as the bright spot for growth time and again when other emerging markets are in turmoil, at the LSE SU India forum 2016, we hope to discuss the road ahead for India. We started this conference three years back with the vision to provide students around UK to hear from and interact with the people who make things happen back at home, and this year we hope to deliver just that.”