London Mayor Boris Johnson is preparing to leave the august office after 8 years. In the last message to the public as mayor, Mr Johnson, a front runner for the Tory leadership, says he changed the city on many front….reports Asian Lite News

“The past eight years have been fantastic,” Mayor Boris Johnson said in a message. “’m thinking particularly of the glorious summer of 2012, when London hosted the greatest Games ever. Since then we’ve used that Olympic spirit to create a wonderful legacy that lives on today. More Londoners now play sport than ever before, thanks to FreeSport, my grassroots funding programme.”

The mayor thanked the volunteer brigade which made the Olympics a huge success.

“Some 70,000 volunteers gave their time to make sure the event was a success too. Now four years later, over 120,000 Londoners have got involved in my Team London volunteering programme. That’s why London’s been crowned European Volunteer Capital 2016,” the mayor said,

“In the time that I’ve been Mayor, over a million more people have called London home and it’s still growing. In fact, in little over a decade we’re going to hit the 10 million mark, becoming Europe’s first megacity in the process. That’s why I’ve been doing all I can to help London prepare for this future. Housing has naturally been one of my top priorities. I’m pleased to say I’m on track to meet my target of 100,000 affordable homes for low income Londoners by the end of the Mayoral term. Indeed, in the last financial year, we helped build over 18,000 affordable homes in the capital. In London’s modern era, that’s a new record. 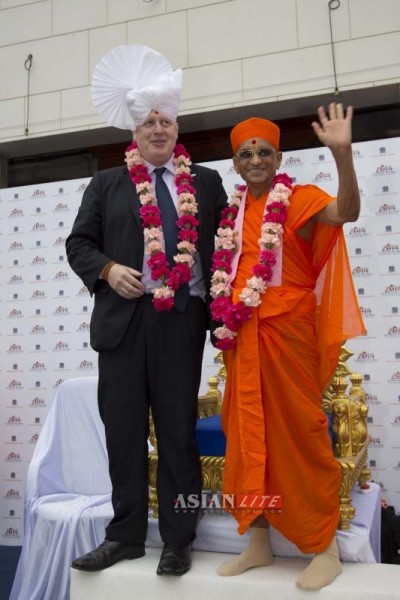 “I’ve also made huge progress in London’s transport system. Line upgrades, Crossrail and Crossrail 2 will connect up our capital in ways never seen before. The new Elizabeth line, a fitting tribute to our great Queen, will transform travel across the city. The Tube pyjama party is on its way too! Soon you’ll be able to take the ‘Night Tube’ on Friday and Saturday nights.

The mayor, an avid cycling enthusiast, said he made London roads safer for many cyclists.

“Then there’s London’s cycling revolution. As a cyclist myself, I’m absolutely delighted that more and more Londoners are discovering the joy of pedal power. New figures show that cycling is up a whopping 73% on the first segregated superhighway. In three years’ time, there will be more people cycling than driving into central London. My new ‘Crossrail for the bike’ which opens on 30 April will make cycling even safer. I hope it will encourage even more people to give it a go.

“I’d like to end by saying that in less than two months, London will have a new Mayor. Whoever takes the helm will enjoy the best job in the world. They will also lead a city that’s in a better position than at any time in its history. I wish them the best of luck.”