Ranieri and his players defied odds of 5000/1 last season to muscle in on English football’s elite and win a first top-flight title in Leicester’s 132-year history.

But the Italian believes that Leicester should be even bigger outsiders, this time, around given the commitments of a debut Champions League campaign and the arrival of new managers at three of the league’s biggest clubs. 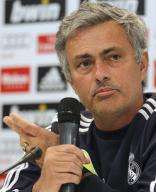 Ranieri’s compatriot Antonio Conte has taken over at Chelsea, while Mourinho and Pep Guardiola are now installed on opposite sides of the Manchester divide.

“Mourinho can be the new Ferguson. He will not stay 26 years, but he will leave his imprint. Antonio and Chelsea are made for each other. Guardiola seems to be the right man in the right place,” Ranieri was quoted as saying by Italian newspaper La Gazzetta dello Sport on Sunday.

On Leicester’s aims for the season, he said, “The basic concept is to start from scratch. We have won the title, we accomplished something perhaps unique, but now we turn the page. If at the beginning of last season the bookmakers quoted 5000/1 on our chances of the title, this time, it’s 6000/1.”

“The goal to start with is the threshold of 40 points to survive. Then we will raise the bar: getting in the top 10, the Europa League, a place in the Champions League and maybe win a trophy from the five in which we will play,” the Italian said.

Ranieri described star striker Jamie Vardy’s decision to snub Arsenal and stay at Leicester as “huge”, but the champions will defend their title without France midfielder N’Golo Kante, who has joined Conte at Chelsea.